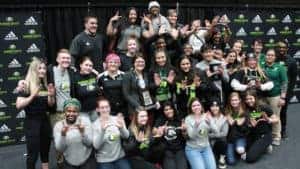 The team earned a total of 113 points as Vidallon went 4-0 in her bracket to secure the title over the No. 1 ranked wrestler in the country. For her efforts, she was named the WCWA Wrestler of the Tournament, as well as the Mid-South Conference Women’s Wrestler of the Week. She earned a pair of 10-0 technical falls in the first two matchups to advance to the semifinals of the bracket. She then took a 9-3 decision over the No. 6 seeded wrestler to advance to the finals. Vidallon faced a three-time Fargo National Champion in the finals. Late in the second period, she was able to score to secure the 5-2 upset victory and the title.

The Running Eagles were named a WCWA All-Academic team as well with Alex Enriquez, Faye Cherrier and Katalina Bartelt being named Academic All-Americans. The women finished with six total WCWA All-Americans, including Vidallon. Enriquez (3rd, 130 lbs.), Aysia Cortez (4th, 130 lbs.), Erica Sotelo (3rd, 143 lbs.), Jordan Nelson (3rd, 170 lbs.) and Gabby Hamilton (4th, 191 lbs.) each made their way to the podium to be recognized as the Running Eagles earned the most podium finishes in program history.

“This weekend was a milestone weekend for our program in many ways, and it is a testament to the strength of our team,” Head Coach Ashley Sword stated.”Our six All-Americans are all drill partners, and it shows in their performance. Even beyond that is that this is a team who loves each other and supports each other, and they want to win for each other. That is the reason we took second as a team for the first time, because the ladies are willing to push for each other.”

Sword continued, “Julia capturing a National Title and the Wrestler of the Tournament Award this weekend was a direct reflection of the work she has been putting in not just this season, but all summer prior. Her goal has been clear, and it has shown in her training. Early in the season we asked the team, ‘Who do you look to when you’re struggling in the room?’ Over half said Julia. She’s continued to grow through each match and adjust, and her finals match was just finishing the work she had already started.”

Sword was also complimentary of the efforts from USA Wrestling, mentioning, “We’d also like to thank USA Wrestling for asking us to host the Pan-American Wrestle Off alongside the WCWA National tournament. It was amazing to watch our top-level women compete, and it gives our college athletes a look at what the next level is and to compete on the same mat as their heroes.”

The women’s wrestling team will take a brief pause from action before returning to the mat on Saturday, February 22, when they travel to Bowling Green, Kentucky for the Mid-South Conference Championships.