Knoxville, Tennessee, March 9, 2020 – The Life University women’s and men’s swimming programs continued to climb in national placement this weekend at the 2020 NAIA National Championships hosted by the University of Tennessee’s Allan Jones Aquatic Center. The weekend was headlined with Life U’s first ever National Runner-Up in freshman Dora Reizinger. 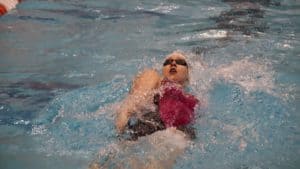 On Wednesday’s opening day, the women’s 800 freestyle relay team of Greta Gonzalez, Nathalia Bento, Victoria Acosta and Reizinger earned the first ever All-American relay honor for Life University with a time of 7:53.60 for a 6th place finish. While the men qualified for the same relay event, the team of Anton Smal, Trent Dungey, Lucas Payan and Anatolii Kuzemko dropped more than 8 seconds from their qualifying time, finishing 11th overall.

On Thursday, the women’s 200 freestyle relay team of Reizinger, Gonzalez, Carla Colon and Bento fell just out of All-American status, but they still helped the cause by scoring team points, finishing in 9th place with a time of 1:40.12. The men’s relay of Smal, Victor Lima, Payan and Kuzemko also earned the team some points by finishing 10th overall in a time of 1:25.45.

The Running Eagles opened up the Friday finals with another All-American finish in the 200 medley relay. The team of Reizinger, Lillian Thurber, Gonzalez and Bento finished 4th with a time of 1:47.24. The men’s team of Payan, Lima, Dungey and Kuzemko also qualified for nationals in the event, finishing 10th. Freshman Smal earned his second All-American honor of the meet in the 400 IM, finishing 5th with a time of 3:57.21. Acosta, also qualifying for nationals in the 400 IM on the women’s side, scored points for the Running Eagles finishing 13th overall.

In the 100 butterfly, Gonzalez scored points for the women’s team by finishing 11th and Dungey scored a point by finishing 16th. In the last race for the Running Eagles on Friday, Thurber earned her second All-American honor of the meet and of her career by finishing 5th in the 100 breaststroke with a time of 1:05.23.

Going into Saturday’s final day and racing for points in final team standings, the Running Eagles continued their strong showing. Coming in with the field’s top time in the women’s 200 backstroke, Reizinger finished as Life U’s first ever National Runner-Up, finishing just .53 seconds behind the winner. Thurber earned her third All-American honor of the weekend with a 7th place finish in the 200 breaststroke, finishing with a time of 2:23.44.