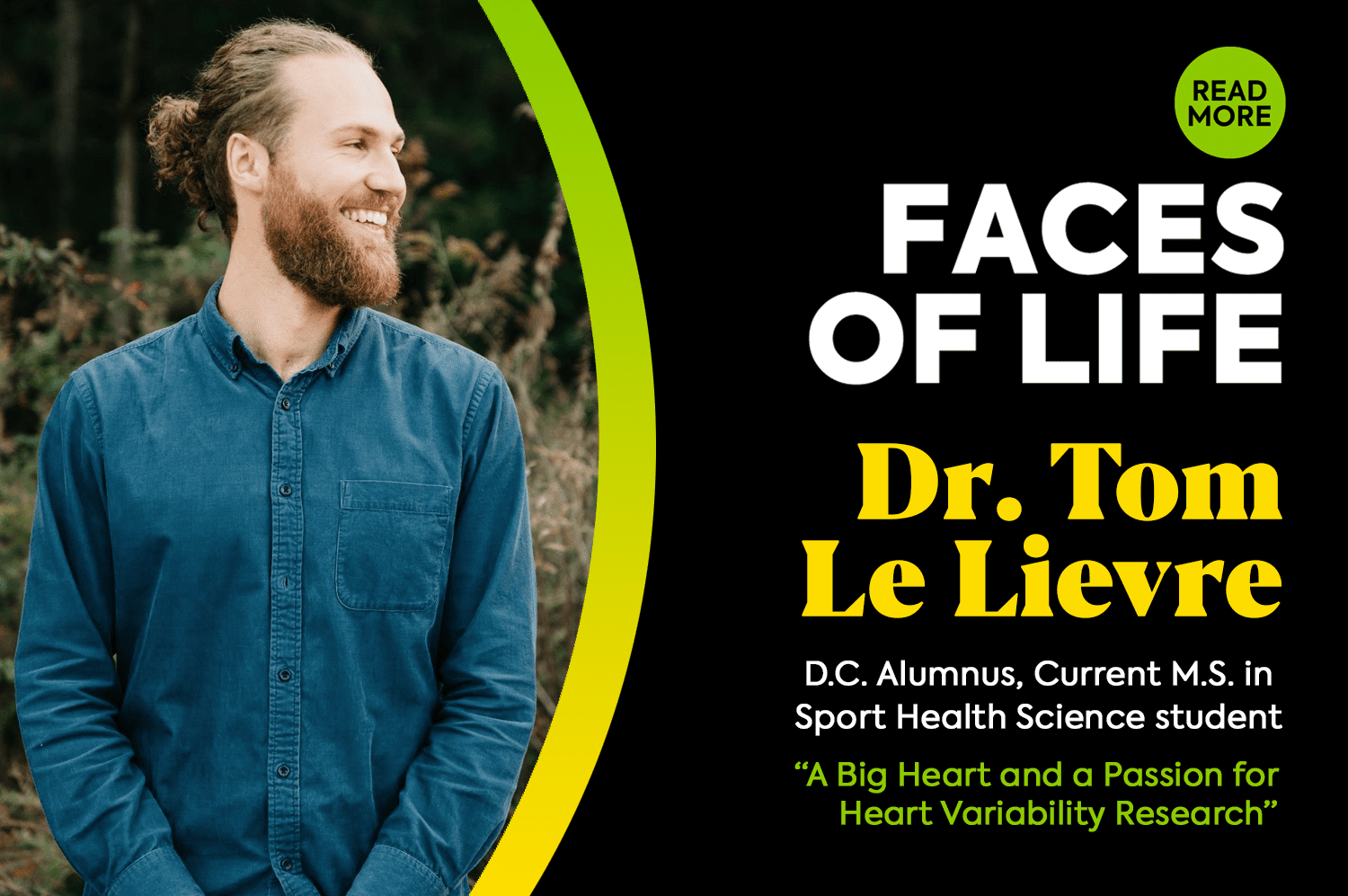 “A Big Heart and a Passion for Heart Variability Research”

Dr. Tom Le Lievre was born in Jersey in the Channel Islands, a self-governing dependency of the United Kingdom (UK). As a student-athlete, Dr. Le Lievre became a patient of Jean-Pierre Meersseman, D.C., the former Medical Team Director at AC Milan football club, and developed an interest in Chiropractic through that experience.

He studied exercise physiology at Loughborough University in the UK before moving to the states to enroll in the Doctor of Chiropractic (D.C.) program at Life University (Life U). He recently got engaged to his fiancé, Cara. They met while studying Chiropractic at Life U.

“I made a very last-minute decision to attend Life U. I had never been out before, never visited, so it was all [very new…]. The most memorable thing was learning about the philosophy of Chiropractic, going to things like Chiropractic Assembly and hearing, for a lot of us the first time, chiropractic philosophy, Vitalism and what true health is,” said Dr. Le Lievre. “I remember sitting in classes, sitting in Assembly thinking ‘Wow. How come no one knows this. Why isn’t this common knowledge in the rest of the world, this aspect and philosophy surrounding health?”

As an international student, culture shock might have hit Dr. Le Lievre a little bit as he described coming from the small island nation of Jersey where he could usually walk everywhere, to the hustle and bustle of Metro Atlanta. And of course, his studies kept him plenty busy.

“There is a lot of information in your first quarter, a lot of classes to take and different information, so the intensity surprised me. You had to be organized; you can’t slack at the beginning because it will set you up for failure at the end of the quarter,” said Dr. Le Lievre.

“You can clinically be the best chiropractor in the world, but if you can’t connect and communicate effectively, that will go to waste. Life University prepares you very well clinically and scientifically for practice, and it is up to you to develop the interpersonal skills to be able to complement your clinical abilities and connect with patients,” said Dr. Le Lievre.

After 18 months of practice out west, Dr. Le Lievre moved back to Georgia in 2021 and began to practice at Corrective Chiropractic Woodstock.

Dr. Le Lievre is heading up heart rate variability research with Corrective Chiropractic, Life University and WHOOP, Inc. as part of his master’s.

“Dr. Austin Cohen initiated a partnership between Corrective Chiropractic and the Center for Chiropractic Research, so we can collect and analyze the heart rate variability data from the thousands of patients we are serving to observe the effect of Chiropractic on heart rate variability,” elaborated Dr. Le Lievre. “I am in the final stages of my master’s in Sport Health Science, and due to my position as a chiropractor at Corrective Chiropractic, I chose to pursue the research track and work alongside Dr. Stephanie Sullivan and Dr. Yori Gidron in this study.”

Wherever his studies and his career take him next, it’s clear Dr. Le Lievre’s heart beats for the chiropractic profession, and that should take him far.