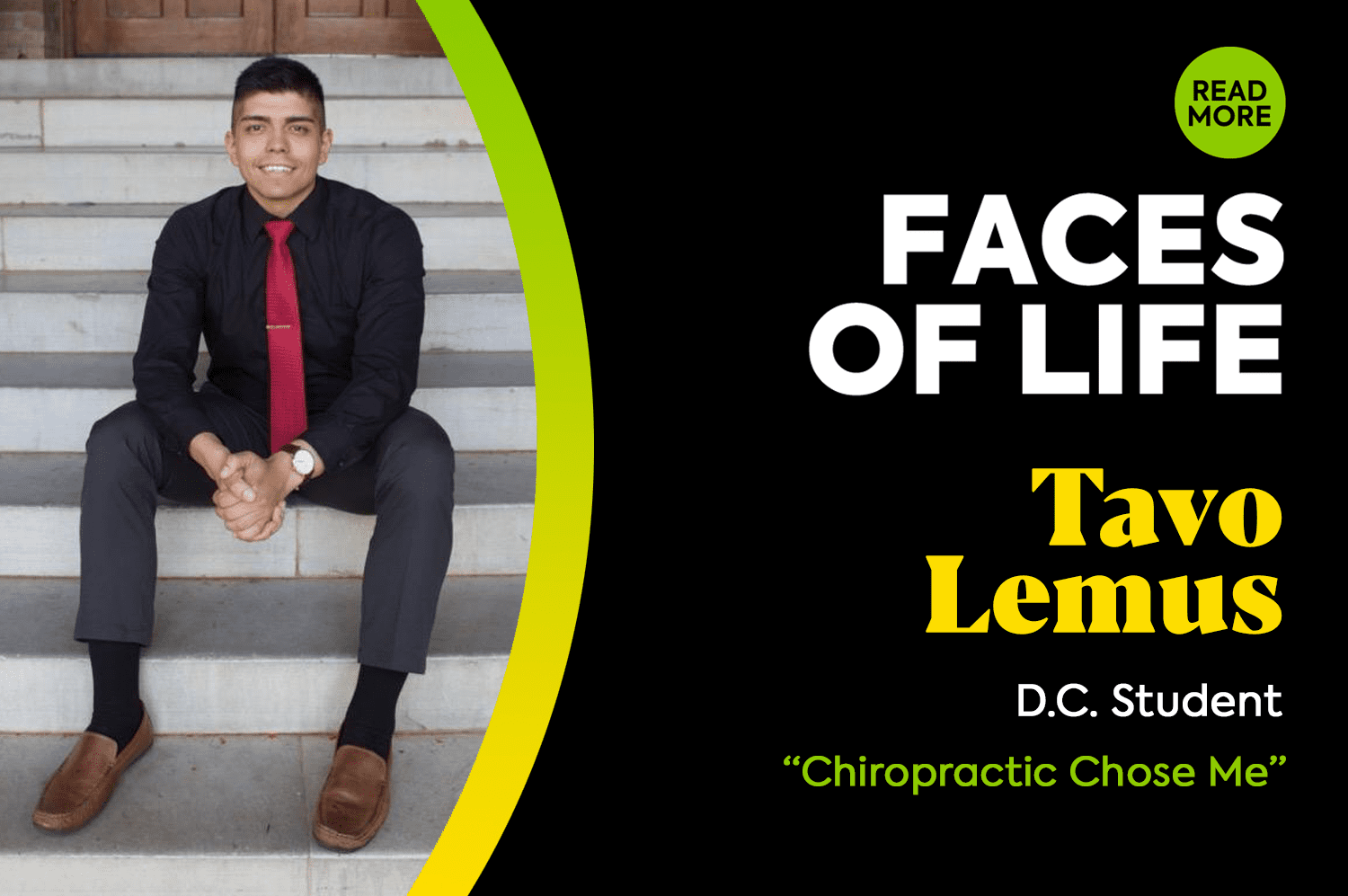 Texas-born and raised by Mexican immigrant parents that met stateside, Tavo Lemus knows what it is like to have a big family, as he grew up with two brothers and four sisters. It’s interesting how formative experiences in our youth can come into play later in life and shape our interests and passions. Lemus reflected on how his mom used to ask him to “crack her back” to relieve built up tension. She had noted that Lemus might do well in a profession that required working with his hands, though he initially resisted.

“You always hear that ‘I didn’t choose Chiropractic, Chiropractic chose me’,” Lemus remembered with a chuckle.

Lemus explored a few different career paths while in high school but found himself most drawn to biology and animal science—really anything to do with the inner workings of living things. He always considered himself a scientist because of an award given to him by his eighth-grade science teacher dubbing him “the next great scientist.”

That idea of being a scientist followed him from early on, so he began to explore what that really meant and what he could do with that knowledge to formulate a career for himself. Generally speaking, “a scientist studies the physical and natural laws of the universe for truth.”

But that begged the question, what kind of truth did Lemus desire to seek out? Lemus first attended a junior college and then completed his undergraduate degree at Texas Tech. He felt privileged to find himself at a university with a highly rated biology program. And though he enjoyed the study immensely, he simply felt something was missing, and at one year out from graduation, he still drew a blank on where to focus his next steps.

A graduate school fair came to Texas Tech, and he went down the line of all the tables and program opportunities to try to gain clarity about his future plans. Nothing seemed to quite fit until he came onto a “little black table that said Life University (Life U)”. Lemus had never heard of the school before, but after talking to a representative, he came away wanting to learn more.

Lemus also had very little previous knowledge of what Chiropractic was, but the philosophy of Vitalism that Life U is founded on echoed much of his personal beliefs about how “the power of the body heals the body and how the body is self-maintaining, self-organizing, self-healing.” He experienced an aha, lightbulb moment.

“Everything [the Life U representative] was saying was exactly what I was looking for. I was like ‘This is it!’” said Lemus.

Lemus visited a local chiropractor in Texas affiliated with Life U to ask more questions and received his first ever adjustment. Then, with the aid of a small scholarship to cover costs, Lemus drove 12 hours from Texas to attend LIFE Leadership Weekend, and that sealed the deal.

“There are so many genuinely nice people here. I used to think ‘Man, these people are too nice.’ But no, that is just how they are,” said Lemus.

In addition to his coursework, Lemus is also active in several Life U student organizations, most notably as the Vice President for Neuro Emotional Technique (NET) club.

NET club is an innovative space for students to learn new skills. In the Life U D.C. program, we look at three major categories of events that can cause subluxations, misalignment in the spine. Those three categories or “the three Ts” are Thoughts, Toxins and Traumas. Toxins and traumas in a way are simpler to identify as they relate to physical input, but NET club focuses on the mental side of Chiropractic that is sometimes overlooked.

“The body, the viscera, actually makes emotional chemical signals that travel up to the brain, and the brain says ‘What do I do with this signal? Do I express this anger, or do I hold it back?’ But if you don’t express emotions, they stay in you, and the body remembers. It will cause stress and can lead to problems,” said Lemus.

Skills reinforced in NET help chiropractic students understand how to express emotional input in a physiological way, not as a replacement for therapeutic mental health work, but as another avenue to alleviate symptoms and provide adjustment.

Lemus may be a late comer to Chiropractic, but his commitment to the profession now is impressive. He has come a long way from that young man who shook his head when his mom used to remark on his natural ability to work with his hands. Now he serves as an eager face at a little table of his own, telling others about how Life U has made an impact on his life and how Chiropractic makes a difference.

Calming the Mind and Quieting the Thoughts