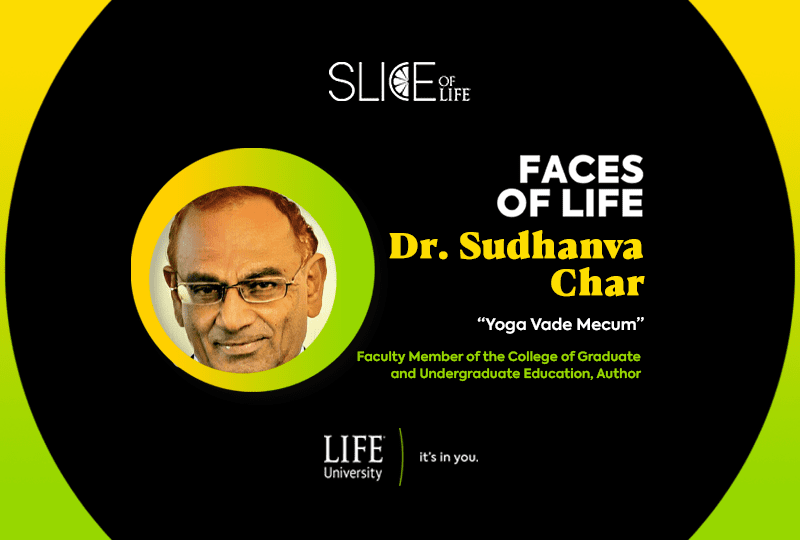 Faculty Member of the College of Graduate and Undergraduate Education, Author

As a longtime professor here at Life University (Life U), Dr. Sudhanva Char has seen the University grow and thrive since his initial start date in 1997. Dr. Char has served with the Business and Nutrition departments of the College of Graduate and Undergraduate Studies (CGUS) for over 25 years. Originally from Bangalore, India, Dr. Char grew up in a family deeply invested in education, with his father working as a college professor and many of his brothers working as teachers. Before coming to America, Dr. Char worked in the private sector and focused on his personal education, eventually earning a Ph.D. in 1978.

Dr. Char and his family came to America in 1986, so he could take the position of Professor of Marketing at Atlanta University (now Clark Atlanta University). Eventually, he came to Life U to continue to grow in his career in higher education.

“Life U is not one of those universities functioning like a factory, churning out graduates by the thousands. It’s a different kettle of fish as a university where there is a personal interaction with every student,” said Dr. Char.

Dr. Char also expressed his gratitude for the academic freedom that Life U faculty has to explore academic interests, and as such, Dr. Char has published a number of papers on a variety of topics in his time at Life U. Recently, Dr. Char has been exploring his long-held “penchant for writing.” In the past, Dr. Char has focused his writing on industry-specific and academic writings, but he has branched out a bit by recently publishing a book titled “Yoga Vade Mecum: Health Outcomes of Yoga Intervention.” Dr. Char is a certified yoga teacher and wanted to take his passion for yoga to create a scientifically based reference book for people to use to see how yoga can help people live happy and healthy.

Yoga Vade Mecum describes classic aspects of yoga, such as poses, positions, cleansing exercises and breathing exercises. Yoga Vade Mecum then goes on to provide associations between those elements of yoga with various areas of the body for the purpose of strengthening those areas to alleviate anxiety and stress and improve a variety of conditions or ailments within those systems. Dr. Char’s book is available in both print and Kindle formats on Amazon.

Dr. Char had noticed the claims that people make about yoga’s potential health benefits but that there was little verifiable scientific evidence to look to in a digestible way, so his book seeks to help remedy that.

“When people came to see how yoga could help them with robust mental and physical health, people took to it in a big way,” said Dr. Char.

Despite its popularity, however, Dr. Char notes how yoga is still treated as just another exercise regimen or practice “without any real knowledge about why yoga helps out.” Yoga Vade Mecum seeks to consolidate findings from many clinical studies conducted in relatively recent years so that there is a more informed view of the practice’s benefits.

Dr. Char’s main area of expertise is Statistics, and he plans to continue to utilize that expertise to further the academic rigor of papers he publishes with Life U. He also hopes to continue meaningful collaboration with fellow Life U faculty members to meet this collective ever-present goal.

A Quick Plea for Audiobooks