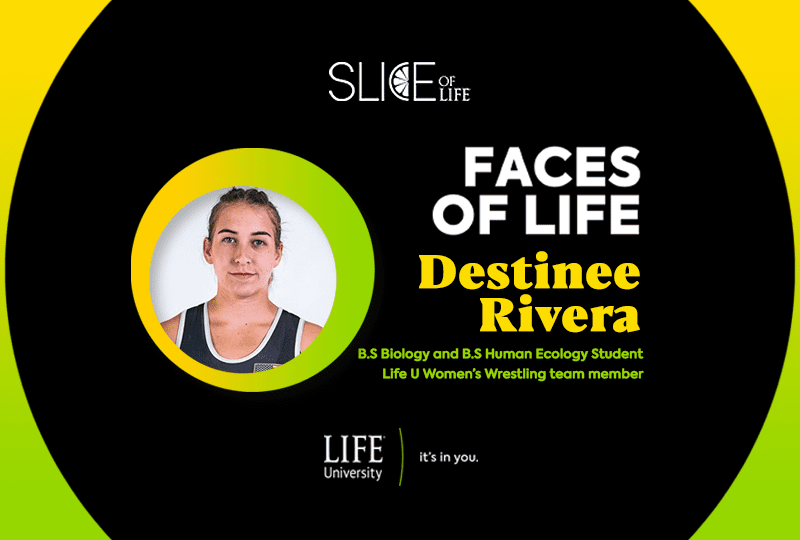 “A Natural World Full of Possibility”

As a child, some might have mistaken Destinee Rivera for a fish for all the time she spent in the water and on the beach growing up in Richmond Hill, Georgia. Her respect and admiration for the natural world were apparent from early on, spending many afternoons on the waterfront and by the marsh watching aquatic wildlife in its natural state and taking in beautiful sunsets. Rivera is the youngest of three girls in her family, though her sisters are much older, so her cousin became her partner-in-crime.

“We could go four-wheeling wherever we could find trails, fish wherever we saw water and make many trips out to the Oatland Island Wildlife Center and other nature reserves near us and across the South Carolina state borders,” said Rivera.

Rivera’s active lifestyle also involves a number of competitive sports, first soccer and now wrestling with the Life U Women’s Wrestling team. In fact, Life U’s fantastic wrestling program is largely what attracted Rivera to the school in the first place.

“Being a student-athlete at Life U is a lot harder than I initially thought it would be. I just finished up my senior season, so I have had time to adjust to it, but the department does have high hopes and standards for its athletes. One thing my coaches always preached to us is that we are students before we are athletes,” said Rivera. “We came to college to get an education, so they enforce a higher standard than even the Athletic Department does. I am grateful to them for that because wrestling professionally isn’t my end goal. I am working on building a life apart and outside of it.”

In her time at Life U, Rivera has enjoyed seeing the campus grow to offer new opportunities to students outside of the well-known chiropractic program.

“A lot of new initiatives have been put into place to help undergrad and graduate students be set up for a successful future that doesn’t involve becoming a chiropractor. I am super excited to see where all these resources take students. I for one am learning about a whole new side of things with the Human Ecology program and the connections that I am getting exposed to because of it!” explained Rivera.

As a double major in B.S Biology and B.S Human Ecology, Rivera is learning a wealth of compelling information about the “intricacy of life” as well as self-sustainability and the impacts of global climate change. She is already applying her knowledge to real-world problem solving as Co-Founder and President of the Green LIFE club at Life U, an environmental club that focuses on educational and service projects around campus, such as a recent series of Earth Day events.

Rivera currently volunteers with the Cobb County Water System. Their volunteer program is in its second year and exists to educate the public on the importance of water and its health. Additionally, Rivera is gearing up to start a new job at the Chattahoochee Nature Center as an environmental educator for their summer camp. She will get the opportunity to help educate the counselors and, in turn, assist the counselors in educating campers. Rivera will be trained on how to handle some of the animals they have there and will be able to demonstrate with them.

As if her plate wasn’t already full, Rivera also hopes to work with the University on a research project revolving around a potential rainwater garden to help minimize the effects of climate change on the grounds.

After graduation in December 2022, Rivera plans to take a few years off from the scholastic environment to build up her résumé and save money for further academic study. She eventually hopes to become an active participant in “urban sustainability and resiliency and focus on retrofitting cities with more green architecture,” a path that would require more schooling in the future.

Possible Career Paths for Business-Related Majors at Life U