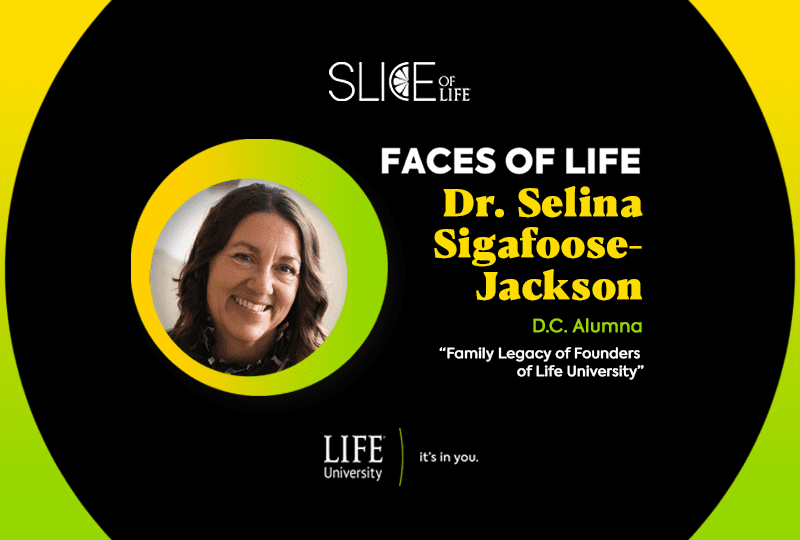 The Sigafoose Family is synonymous with Life University (Life U). Dr. Selina Sigafoose-Jackson’s parents, Dr. Jim Sigafoose and Patsy Sigafoose, are both co-founders of Life U. Their daughter continued the family tradition, graduating from the College of Chiropractic program at Life U in September 1989. Sigafoose-Jackson was born and raised in York County, Pennsylvania and never expected that she would end up back there, but that is exactly where she and her husband Dr. Kevin Jackson have lived since moving from Florida some 31 years ago. She currently lives near her childhood home, where her father had his practice.

Dr. Jim and Patsy Sigafoose moved the family to Florida in 1981 when Sigafoose-Jackson was in high school. She graduated from high school in Venice, Florida in 1983 before going on to college in Florida. However, she quickly realized that it was not the right place for her, so she moved in with her brother who was studying at Life College (Life U today). She finished her undergraduate work and then started her journey in Chiropractic at Life U in April 1986. Earlier that same year in January, she had met her husband. At the time, Life U offered accelerated classes through Brenau University (then Brenau College), so she took those accelerated courses. Both she and her future husband graduated from Life U in September 1989.

During her years as a Life U student, Sigafoose-Jackson, worked on campus in the Admissions Office. At the time, she was still taking undergraduate courses to prepare for the D.C. program. She had to get permission to work on Saturdays from then-President Dr. Sid E. Williams because, at that time, the University was closed on the weekends and had a strict policy of no one on campus. She handled calls from students making sure that they had everything completed to start school. Many calls were from students who were slated to start school in just a few days. A couple of times, Sigafoose-Jackson gave these students a place to sleep so that they could start school right away. She was living in a condo with her brother and two other roommates and offered these new students her couch until they found a place to live. It was that important to her that students with a passion for chiropractic education didn’t wait to start school.

“At one point there was no admissions director, and I did everything. I read the transcripts. I analyzed the transcripts, sent the acceptance letters, and I sent out the information packets. And I loved that job,” Sigafoose-Jackson said. “That’s how I met my husband. He came into the office to check on his transcripts.”

After her graduation and marriage, Sigafoose-Jackson and her husband decided to set up individual practices in Florida to be near her parents. The work of running two separate practices was difficult and financially daunting. Eventually, they decided that they wanted to practice together, and since her husband is Canadian and they both had licenses in Pennsylvania, they chose that as their next home. The funny thing about choosing a place to live is that the thing you may avoid the most may be what you need the most. Her husband scouted out different areas to live with a request from Sigafoose-Jackson that she wanted to stay away from York County where she grew up. Because areas of Pennsylvania tended to be a bit rural in 1991, she had three specific requirements for their future home: a Walmart, a Mexican Restaurant and a Montessori School for when they had children.

“Well, he landed in York County, but it was on the east side,” Sigafoose-Jackson noted.

“I knew that God had led me there, so I fell in love with it,” said Sigafoose-Jackson.

After creating a thriving practice with her husband, and at the age of 31, the happy couple decided it was time to start their family. She left work to take some time off to have their first child but felt a deep guilt about leaving the practice and returned much sooner to work than she was ready for both emotionally and physically. Her journey into parenthood taught her about post-partum depression.

“I wasn’t healthy enough to go back, and I struggled. And you know, you make your way, you heal. Then I had another baby, and I thought ‘Ok, I’m going to prepare for this.’ I was nursing. I really struggled with breast feeding. I had a yeast infection, and we (she and the baby) were passing it back and forth. The pain to breast feed was like no other, and I think that added to it. I [also] battled with depression, but I didn’t know what that was. I thought it was ‘I’ve got too much on my plate, just push forward, you’ll get through this,” said Sigafoose-Jackson.

When she gave birth to her second child, she decided that the secret to her success would be to ‘stay busy’. Sigafoose-Jackson shares her story of having both her babies in the car and just wanting to be able to get a cup of coffee at Starbucks, but at that time, the drive-thru did not exist. All she could think was that she was stuck in her car.

At that very moment, her mother called her. Her mom was driving back to Florida after visiting with Sigafoose-Jackson in Pennsylvania. As she was driving home, she was listening to an interview about a case that involved ‘something called post-partum depression.’ The interviewer said that Omega-3 helps with this. As a vegetarian since she was eight years old, Sigafoose-Jackson wondered if she might be nutritionally depleted, and yes, she in fact was and needed a pure form of Omega-3, which she got through supplements. She took the Omega-3 supplements using fish oil, and because of her holistic healthcare background, she knew how to find the clean, molecularly distilled grade to use.

“So, I started taking Omega-3, and honestly, it was like pop rocks going off in my brain. I felt myself come back to life, and of course [I was] always getting adjusted. The chiropractic philosophy that there’s got to be an answer to this. There is nothing wrong with me,” said Sigafoose-Jackson.

Through this experience, she learned to stop trying to be superwoman. Sigafoose-Jackson changed her schedule from five part-time days a week to three full days per week with the full support of her husband. Building this work-life balance between family and work was as important to her health as the supplements.

Through her years of work and service in Chiropractic, Sigafoose-Jackson has words of wisdom to share with young Life U alumni.

As an example, she shared about a recent 85-year-old patient who received a chiropractic adjustment for the first time in his life. He suffered for several months in pain after a fall, and when she looked at his X-rays, she saw that he had an old fracture. He had been treated with drugs, but nothing helped, and the previous healthcare professionals he saw did not notice the fracture in the X-rays. She was not going to refer him out to someone else because he came to her for help, and up to now, the other healthcare professionals were unable to help him.

“I chose to adjust him but be smart. I chose to work around the fracture, above and below the fracture, and I used the X-rays to guide me. Literally, it took me two minutes to adjust him, and he sits up and says, ‘Oh my gosh, I feel better just sitting here.’ So, I said come back again tonight and let me check you again. So, he comes back in again with his granddaughter who brought him in smiling. I mean the man was thrilled.”

As for the experienced alumni who have been working in their chosen profession for several years, Sigfoose-Jackson has this advice.

“To the people who have been in practice for a long time, get out of your practice. Give thanks to all that you’ve been given and participate in this profession. Volunteer, reach out, get involved with the alumni association, get involved with your state association. Get involved with these national and international chiropractic associations. If you’re a woman, we have the League of Chiropractic Women that’s there, that needs you, that wants you, that wants to support you and mentor you. Get involved. You need not be apathetic and think ‘what’s in it for me?’ At some stage in our lives, we have to give back.”

Sigafoose-Jackson is involved in several leadership roles in Chiropractic. She is one of the founders and the current treasurer of the League of Chiropractic Women. She served on the Life University Board of Trustees from 2014-2015 and is the first female president of the International Chiropractic Association (ICA).

Hispanic Heritage Month 2022 at Life U