Home > TUESDAY TRIVIA > Trivia – What is a Running Eagle? 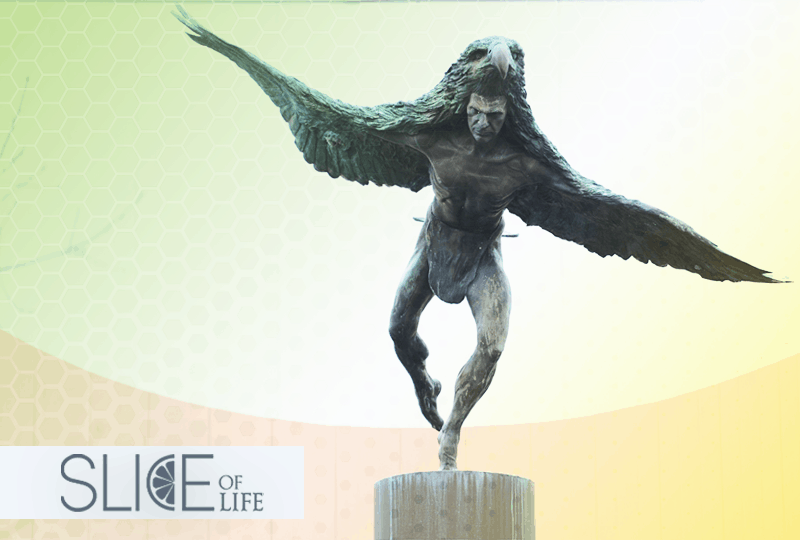 In ways great and small, the identity of any given university is guided through history by the mascot with which they are associated. Some schools go fierce: Columbia Lions, Clemson Tigers and Baylor Golden Bears—oh my! Some schools go regional, such as the Ohio State Buckeyes, the Florida Gators (double dipping in ferocity as well) and the Nebraska Cornhuskers. So, when I first heard about Life University, I wondered what their mascot was. After I heard it was the Running Eagles, I have to be honest that I still wondered what their mascot was.

Today’s post is for anyone who either has asked the question “What business does an eagle have running?” or any student who is sheepish about how they didn’t really pay attention to their college tour or orientation. Because, let’s be a little honest, why wouldn’t the eagle be soaring, swooping, screeching, hunting, gliding or preening? What about some clacking of the beak, a little sharpening of the talons? These are the noble actions we expect from a bird who has gone on to be one of our chief national symbols and has been equally evident on crests, shields and flags all the way back to ancient Rome and before. Who wants to see the eagle pumping around on those little legs when it could stretch its wings and fly?

Well, there’s a reason, and it actually has much, much more to do with American history than to do with the behaviors and postures of birds.

The answer actually comes out of Native American history, particularly the Blackfoot tribe, which roamed around roughly what today would be considered Montana and north up into Alberta, Canada. So, circling back super quickly, we aren’t talking about a mascot who is particularly regional even though there were dozens of Native American tribes who originated in the American Southeast; however, we will get a healthy portion of “fierce” as well as an interesting snapshot of American history and the tradition of people making their own path in life.

The story begins with a young woman born into the Blackfoot tribe under the name “Brown Weasel Woman.” Now, this is speaking in a generality that I am sure scholars of Native American history could easily qualify or find appropriate counter-examples, but in tribes such as the Blackfoot and others, there was a familiar enough separation between gender expectations: men were fighters and hunters, women were caretakers and homemakers. Brown Weasel Woman would go on to be one of many American women in the legacy toward today who has battled such stereotypes by demonstrating their own excellence and leadership. According to the U.S. National Parks Service, the story of Brown Weasel Woman started with a fierce dedication both to her own family and to her community:

As she got older, she accompanied the men on buffalo hunts, even saving her father’s life during a hunt when an enemy war party attacked them. When her father was killed in battle and her mother became ill, Brown Weasel Woman became the primary caretaker of the family. However, by taking a widow into her family to help with those responsibilities, she was again free to hunt the buffalo.

So, we begin with an independent and capable woman, but (and I don’t mean to make light of another culture’s names) is that enough to be promoted from Brown Weasel to Running Eagle? That is where we get to the meat of the tale. At one point, the Blackfoot tribe had a herd of horses, necessary for both hunting as well as defense, stolen by a rival tribe, and Brown Weasel Woman was determined to be among those to ride out and take back what was rightfully theirs:

One version of the story states that the leader of the war party told her to go back, but she refused. When he said that the war party would not continue unless she returned home, she told him to go ahead, and that she would retrieve the horses on her own. With that, the war party – including Brown Weasel Woman – continued on to get their tribe’s horses back.

After finding the horses and leading them toward home, they stopped to camp for the night. Brown Weasel Woman stayed awake as a lookout, while the others slept. She spotted two Crow warriors attempting to steal back the horses. Stories conflict as to whether she killed one or both of the warriors, but the result was the same: she saved the herd. During another raid, she was part of a group that captured several hundred horses. She eventually gained a reputation as a successful hunter and warrior.

These deeds and her continued service to those around her eventually earned her the new title of Pi’tamaka or “Running Eagle.” So, returning all the way back, let’s reconsider the name. The name isn’t describing an eagle choosing to go by foot for a while, it is already a comparison between a human and one of the sky’s greatest predators. Pi’tamaka, a human still bound to the ground, had all of the pride, vision and skill of an eagle; that is what the moniker of Running Eagle is meant to connote, someone surpassing their limitations to such a degree that we need to find new metaphors and new symbols to describe them. Not only is the original Pi’tamaka a role model for people who feel stereotyped or pigeonholed for who they are, but her willingness to work for and protect her community makes her and her namesake an ideal figurehead for Life University.

Human Ecology and Designing Our World

Philosophy Night at Life U

Coaching Psychology: What is it and why is it important?