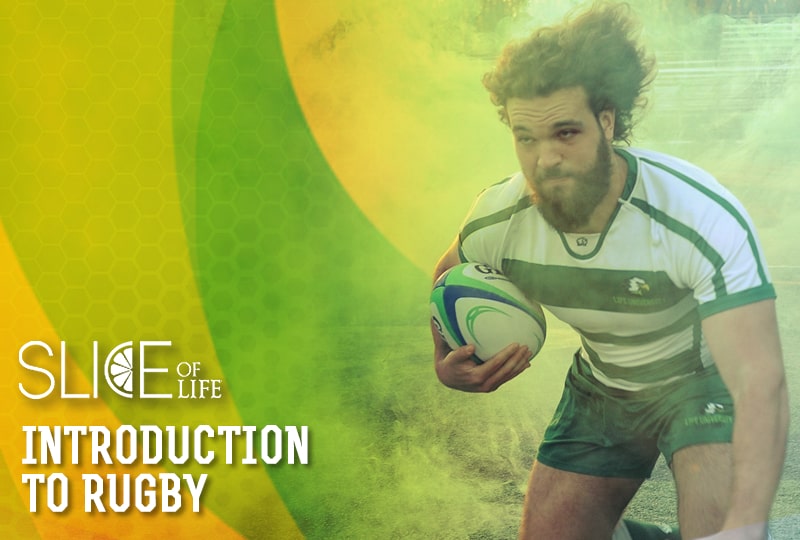 One of the most successful branches of Life University (Life U) is our rugby program, the famous Running Eagles. Whether you are a student or Marietta community member, there will be plenty of action to get excited about this season as the Running Eagles return to regular action. From 2013 to 2019, Life U made it to the D1-A National Championships seven times with four wins, including back-to-back Championship wins in 2018 and 2019.

With this tradition of success, there is plenty to anticipate this coming year, but one big question looms over the season. Uh, what exactly is rugby? To help you cheer on the Running Eagles this season, here is a quick rundown for American sports fans who might have a vague picture of rugby (because nobody wants to start cheering at the wrong time). I will try to use the rules and basics of NFL football as a point of comparison, but even if you aren’t too familiar with football, then we can fill in the picture for you. Also, this is an intro in the sense that is meant to help you understand what is happening on the field or on your screen rather than covering all of the rules; my anticipated apologies for any rugby diehards out there who see me simplifying things here.

Alright, what is the team actually trying to do and how does it score them points. There are four main ways to score points in rugby, but let’s focus on the main two first since they have clear corollaries in American football.

1)         A Try – 5 points. Now yes, “a try” might sound to an American ear like merely making an attempt at something, but this is actually the rugby equivalent of a touchdown. For those even unacquainted with the NFL, each rugby team is trying to progress the ball their direction down the rectangular field. At each end, regardless of rugby or football, is a goal zone, and it’s each team’s imperative to get the ball into that area. In football, you only need to get the ball across the goal line to score, but in rugby, you have to make contact between the ball and the turf of the goal zone. What this means is that you will often see players diving to the ground to score even if no opponents are around them – it could be easy to mistake this for some showboating celebration (which is also totally possible), but is actually a very regular part of the game.

2)         A Conversion – 2 points. A conversion occurs after a try and is very much like the “point after attempt” kick in football. In rugby, the goalposts look a little different, but the goal is the same, as the attacking team has a chance to kick the ball between the posts. Also note that although the points awarded specifically for each a try and conversion are shifted from football (where they would be six and one respectively) the total of seven is the same, so as a broad generality, you can think of the teams aiming to score in seven-point chunks.

3)         A Penalty Kick – 3 points. Now this is something like a penalty kick in soccer in that it is the result of the defending team committing a foul, but in action it looks much more like a field kick in football because both teams line up, and the kicker gets to line up their shot. Whereas the attacking team in football can choose to try to kick a field goal on any of their given plays, a penalty kick in rugby occurs when play has stopped because of a foul.

4)         A Drop Goal – 3 points. So, this is a bit of a wildcard when it comes to finding football comparisons – think of a drop goal as an impromptu field goal. An attacking player is allowed to, at any time, drop the ball and try to boot it through the goal posts for the same points award as a penalty kick; the catch is that the ball has to bounce at least once on the ground before the kicker makes contact. This becomes a particularly difficult skill when you consider the oval shape of a rugby ball.

Things to Watch For

Obviously, scoring is the primary goal of the game, but here are a few other things to watch out for because they are tiny little features that make rugby unique to many American viewers.

1)         No Pads or Helmets. Probably the most common reaction for a new rugby viewer, especially if they are a parent, goes along the lines of saying a higher deity’s name in a rude way and remarking at how insane this is. The truth is that, while players do inevitably get injured like every sport, rugby players aren’t simply “tougher” or “crazier” than football players (although you can continue to do your own research on this question). Instead, part of the fundamentals of rugby includes learning how to tackle and bring down an opponent more with your arms and core rather than blasting into them skull-to-skull, which is extremely dangerous even with a helmet.

2)         The Scrum. I feel like I have buried the lede here, because this was the most interesting event to me the first time I watched rugby. So, the scrum is sort of like when the offensive and defensive lines of football teams square up on the line of scrimmage (which gets its name from the same root) but with a major, major difference. The players on a given team lock arms and lean face-to-face with the other team’s formation; each line of players will then clash together at the shoulders with their heads alternating—so its something like rams going head-to-head but interlocking like a zipper. While this is going on, the ball is tossed underneath the teams as they jostle back and forth. Once one side pushes far enough to be able to grab the ball out from the bottom, open play recommences,

3)         The Line-out. Finally, a line-out occurs when the ball goes out of bounds; in theory this is much like basketball, where the team taking over possession throws the ball in and hopes their teammates will catch it. Now, how could that possibly be interesting enough to make the list? Well, what’s very unique is that the team throwing in the ball is required to throw the ball straight down the middle of two lines of players, one from each team. The two lines cannot interfere, but the first team to get the ball now has possession and is on the attack. To reach for one final analogy, think of a jump ball in basketball where the player who can get higher in the air has the advantage in securing possession. Rugby takes that a step further as each team will lift one of their players in the air to try to snag the ball out of the air as soon as possible.

In conclusion, I hope this guide has given you a few things to anticipate in a rugby game and maybe stopped you from asking your friends a few of the most obvious questions. Even some of these points have been simplified, so there is much more to learn and games to study within the game. I hope you enjoy the season, and go Running Eagles!

Learn more about Life University’s rugby program and its other athletic teams.