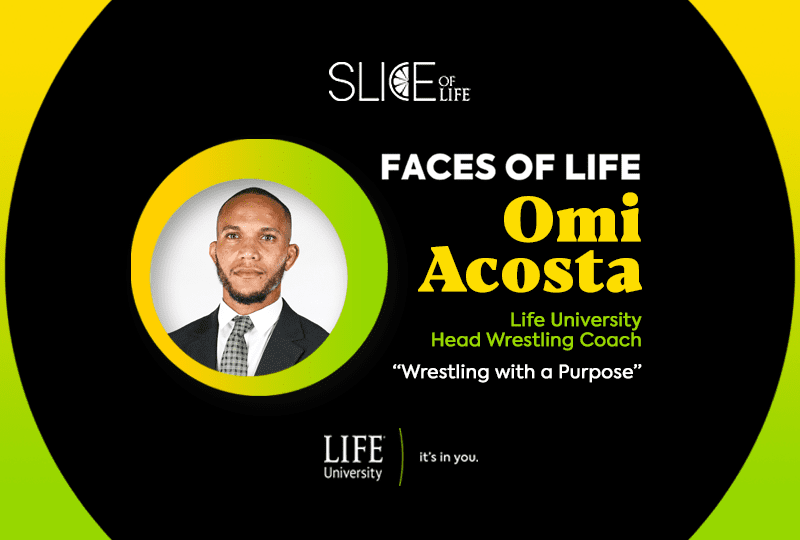 “Wrestling with a Purpose”

Omi Acosta spent his summer break running wrestling camps across the United States during Life University’s (Life U) July 2022 three-week break. He began his national coaching camp journey in Miami, Florida, next moving on to South Georgia, and from there to the Junior College he attended years ago near Chicago, Illinois; to El Paso, Texas; Las Cruces, New Mexico; Chattanooga, Tennessee; Iowa; and finally back to Miami, Florida to his former high school before returning to begin the Summer Quarter at Life U in Marietta, Georgia. At each camp, Acosta wanted to not only teach about wrestling, but most importantly to share his personal journey and how wrestling changed his life.

“Wrestling saved me, and I like to share that story and go around the country and let guys and girls know that they can do it too. They could become successful. Just stick to the sport of wrestling, and they can earn a scholarship and get out of whatever situation they are at.  I think it’s important for me to go around and do that because, at that time, I didn’t have anyone that told me, ‘Hey man. You know you are an inner city guy; you can get a chance to get out of the hood and get a degree,’” said Acosta. “I think that it is important for me to do that. That’s just part of my brand. I need to try and influence as many people as I can and let them know that wrestling can change lives. That’s why I do what I do.”

Wrestling not only gave Acosta the opportunity to learn the English language, but it also gave him the escape route from his self-destructive path. As a high school student who had just moved from the Dominican Republic with his mother and stepfather and speaking virtually no English, he connected with students who felt out of place, not accepted and who also did not speak the English language. This led to troubled times and poor decisions that could have ruined his life.

Acosta said that he was hanging with the wrong crowd and was acting out because he resented leaving his homeland of the Dominican Republic. Though he had been born in Brooklyn, New York, his mother sent him to live with his grandmother in the Dominican Republic when he was 6-months-old while she remained in the states looking for better job opportunities and sending money home to support their family. His mother was in contact with him by phone and would come visit when she could, but her work mostly kept her in the states. When Acosta was about to begin high school, his mother married and brought him to Miami, Florida because she wanted Acosta to have a better education than he could receive in the Dominican Republic.

Life in the Dominican Republic was also not easy. There were times that they had to share what little food they had with a large family while they were waiting for the next paycheck to arrive. Hurricanes were also a regular thing, and there were many times that Acosta and his family would walk great distances carrying buckets of water back to their home because there was no proper water from the devastation left by a hurricane. All these events made Acosta stronger and the human being that he is today. He shares this story with many students around the nation at the camps he coaches so that they will hopefully appreciate all that they have. Acosta lets these students know how much he appreciates everything he has.

During his high school years, a wrestling coach noticed Acosta was always getting into fights. He was a small kid weighing about 90 pounds, and not speaking English made him a target for others to pick on. This coach saw in Acosta a feistiness that could be harnessed in a positive way and encouraged him to wrestle, but he was scared at first because of his size and thought he would be pummeled. His mom thought the same thing. Finally, a friend of his who he really looked up to and thought of as one of the cool kids convinced him to join the wrestling team with him. This friend, who was from Mexico, had navigated between the different groups in the school and learned the fine art of staying focused and staying out of trouble. Acosta decided to follow his path.

His wrestling coaches became like father figures and mentored him all through his teenage years, and he credits them for the person he is today. Acosta stopped getting into fights and trouble. His reading comprehension increased through reading books on wrestling, and his self-confidence rose. Acosta was doing really well in wrestling and moving ahead in school, but then in his senior year, he suffered an injury that kept him from wrestling. He broke his hand and needed surgery, and instead of being turned away, the coaches insisted that he attend every practice and game. They taught him that he had a bigger purpose and needed to be there to support the team; it was not about him, but about serving others. He attended every practice and ran with the team with his hand in a cast.

Because he was injured and could not wrestle, he lost his spot on the team and needed to challenge the new person for his spot back, but he lost that challenge. Instead, he continued to work out and watch the games from the sidelines. His coaches recommended that he apply to junior colleges to compete in wrestling. Acosta took that advice and attended Waubonsee Community College in Aurora, Illinois, where he had the opportunity to join their wrestling team. He did very well there and ended up receiving a national title.

From there, Acosta went to Grand View University in Iowa, where he double majored in criminal justice and Spanish, with the plan of becoming a police officer. He thought that from his experiences in high school, he might be able to help other misguided youths, but he fell in love with the wrestling coach job that his Grand View coach had and decided to coach part-time for them after graduation. He was also teaching full-time as a special education teacher in a local area school system. Acosta also received a Master’s in Exercise Science from Ohio University. Eventually, a full-time wrestling coach position opened with the Coast Guard, and he worked there as an assistant coach. He went back to coach at Grand View before becoming Head Coach at Life U. In 2021, he also graduated with a Master’s in Positive Psychology from Life U.

Today, Acosta’s goal is to bring the Life U wrestling brand across the country in hopes of encouraging as many students as possible to come to the University he now calls home. Acosta loves the vitalistic philosophy at Life U and says it is the same philosophy he learned through wrestling.

Acosta shares his words of wisdom with students. “It doesn’t matter what obstacles life has; always overcome them. God doesn’t put things in people’s way that they can’t handle. If you want to be great at something, be confident and keep going after it. It doesn’t have to be all at once. Greatness doesn’t happen just ‘boom’. It’s just little, small steps that will set you up for success. So, I would say to break everything down and knock it out little by little,” said Acosta.

For more information regarding the Life U Wrestling team, go to Life U’s Wrestling page.

Trivia – What is an Anatomage Table?