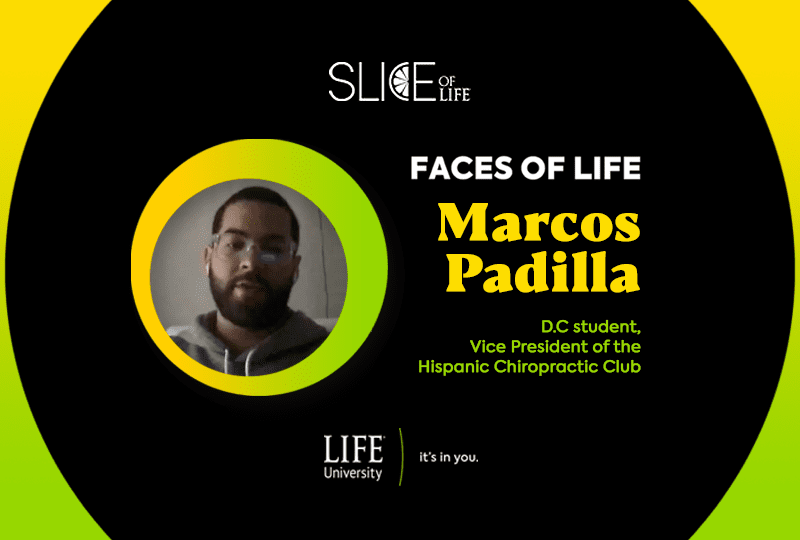 Marcos Padilla grew up in the northern region of Puerto Rico, about 45 minutes from San Juan. He lived there with his mom, stepdad and his sister Kristy Padilla, who currently works for Life University (Life U) as a Bilingual Academic Support Professional.

Marcos Padilla’s Bachelor’s was in Forensic Science. After finishing his undergraduate degree, Padilla visited the Atlanta area to be with friends and his sister. Many of their friends were attending Life U at the time, mainly for the chiropractic program, and they spoke highly of the University. Padilla was not a stranger to chiropractic care, receiving regular chiropractic adjustments from his chiropractor back in Puerto Rico.

In Chiropractic, Padilla recognized a career path that would “allow people to maintain their hobby,” in his case cycling. His chiropractor in Puerto Rico advised him not to ride on his bicycle anymore because of the activities’ effect on his lumbar and cervical (neck) areas.

“With that loss of curvature, she told me to suspend everything. And I didn’t really like the idea because that is the only hobby I have. And when I got here [to Georgia], I saw the connection [between Chiropractic and being able to do fun active hobbies like cycling],” said Padilla.

While in the continental United States, Padilla traveled to Tampa, Florida to get a Crime Scene Investigation certificate. In discussions with the instructor of the certificate program, Padilla admitted his internal struggle of deciding if he wanted to continue in the Forensic Science field or if instead he should pursue chiropractic education.

The instructor in fact understood his chiropractic interest as she was in fact a “chiropractic kid” whose dad studied at Palmer College of Chiropractic. She went so far as to say that she thought that Padilla would probably love the chiropractic profession even more than Forensic Science because he would be able to meet more people and help more people.

Next thing Padilla knows, he is attending LIFE Leadership Weekend, learning more about Life U’s stellar DC program and eventually enrolling as a DC student. When asked what he enjoys about attending Life U, Padilla immediately said “the community. It doesn’t matter where you are from, people know where you are going through and we all know that by going through it together, we are going to get through it better. It’s a community within the students and the employees of Life U.”

Today, Padilla is an involved student on campus as Vice President of the Hispanic Chiropractic club and a regular volunteer assisting his sister Kristy Padilla with Global Voices, a student-centered assistance program that focuses on cultural support and enrichment that falls under the Academic Center for Educational Success (ACES).  He didn’t originally think to get involved in a community leadership role, but he has appreciated the opportunities to grow, network and learn. Padilla recognizes that there is a large population of the Life U community that is Hispanic or Latinx, so having organizations like the Hispanic Chiropractic Club and Global Voices to give students a place to gather and obtain resources to succeed and bridge language barriers is powerful and necessary.

When asked about advice for new students, Padilla had this to say.

“Don’t be afraid. No one is here to judge you. You might think it would be like that, but we actually are not judging anyone. Go to clubs, attend all the clubs you can to see if you can gain an early interest and know where you want to go later in the program,” noted Padilla.