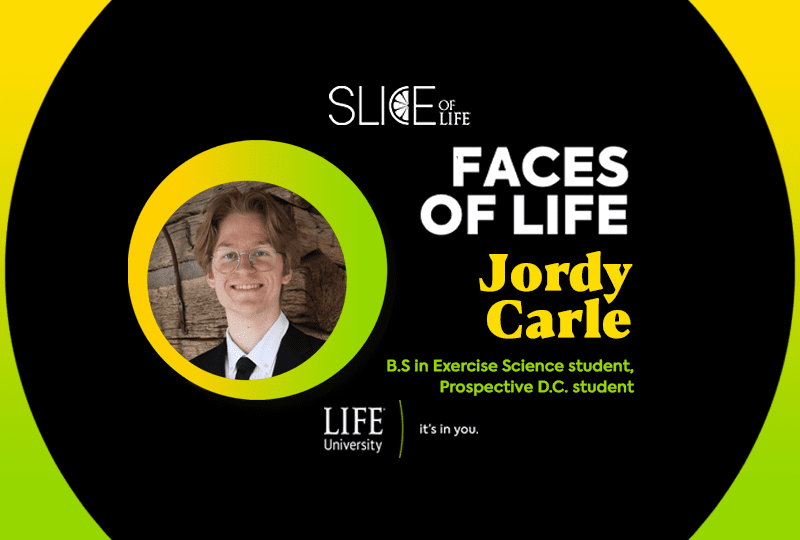 B.S in Exercise Science student, Prospective D.C. student
“Spreading the word about chiropractic care to Belgium and beyond”

Born in Belgium, Jordy Carle has two older brothers who were both at least a decade older than him, so he was “the late-comer” of the family who enjoyed being doted on growing up. After graduating high school, Carle began studying to be a physical therapist, and one of his brothers introduced him to the philosophies of Chiropractic and the Doctor of Chiropractic (D.C.) degree at Life University (Life U). Carle is thankful to have older siblings that have helped show him new opportunities. His family is very close, so the decision to study in America was not an easy one, but it did prove worthwhile.

“The coolest thing about Life U is that it is very small. It’s fun because you get to meet a ton of people, and [a high percentage of students] are in the D.C. program. The coolest part is you always have something to talk about because many people are studying the same thing,” said Carle.

Currently, Carle is studying Exercise Science in his undergraduate program, so he will have a good foundation to build upon when he transitions into the D.C. program.

“I went with Exercise Science because I was so interested in the human body and how it moves and what muscles it uses. And I thought ‘I am going to see this in D.C. anyway,’ so I figured I wanted to get that really well,” said Carle.

Like many Life U students, Carle speaks positively about his experiences with his professors, finding them understanding, fair and eager to answer any questions. Outside of the classroom, Carle likes to attend different clubs and events to expose himself to fun things and new ideas. As a member of Student LIFEforce, he has a passion for spreading the word about the benefits of chiropractic care and hopes to one day bring this knowledge back to his home country of Belgium.

“My mom always told me ‘Coincidence doesn’t exist; everything happens for a reason,’” said Carle.

It’s no coincidence that Carle found himself at Life U, and not-so coincidently on his first week, he ran into Magi Rodgers, Executive Director of Alumni & Friends. He told her all about his big move from Belgium to the states and his desire to enter the D.C. program after completing his undergraduate degree. Rodgers provided him with a helpful information packet all about Student LIFEforce. The group’s mission to spread access and knowledge about chiropractic care and chiropractic education struck a chord with him.

“Chiropractic is not well-known in Belgium, so this is perfect for me,” noted Carle.

Carle eagerly waited to join in his second quarter, as Student LIFEforce requires students to have completed their first quarter prior to joining. He has really enjoyed “such a beautiful experience with beautiful people.”

Carle has been doing some personal research and seeking out advice on how to take what he has learned back home and share it one day after having some time to cultivate his skills here in America. As a rule of thumb, Carle mentioned that in many ways it is simpler to explain to someone the benefits of chiropractic care if they have never been exposed to it before as opposed to someone who may have preconceived notions or a negative experience. His home country’s general lack of awareness in that regard may smooth the path some, but Carle continues to work on his chiropractic elevator pitch so that he can let anyone he encounters know more about what he is passionate about and why.

Carle hopes to continue to the D.C. program after his undergraduate studies. After graduation as a D.C, he plans to practice stateside for a long while until he feels he has achieved a skill level that would allow him to be an ambassador for Chiropractic in his home country. His dream is to one day open the first-ever chiropractic school in Belgium.