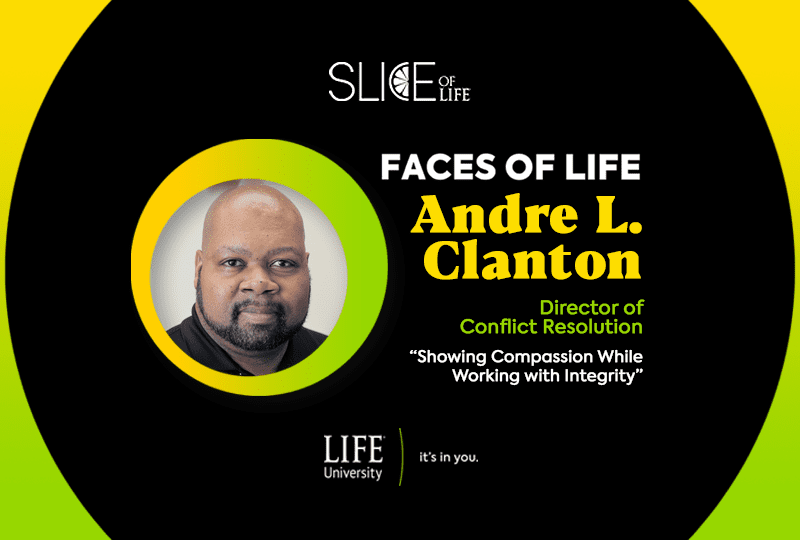 André L. Clanton, Director of Conflict Resolution and Accountability in Student Affairs, began working at Life U in 2011 before leaving for another opportunity and then returning in 2015. He has been here ever since.

A new and important role that Clanton has taken on this year is with the Association of Student Conduct Administration (ASCA) as their Sexual Misconduct & Title IX Chair. Through this position, he works with “student conduct professionals across the nation to help the student conduct profession,” said Clanton. Together this group brainstorms on how things are working at each other’s campuses and how to help each other utilize the shared information.

In ASCA, they have created Communities of Practice for several areas. Each Community of Practice shares with other areas regarding area-focused best practices. These different communities may be indirectly tied to student conduct, but it is important that they communicate with one another. For that reason, there is a Community of Practice for Housing and Resident Life because Housing typically has conduct issues. Additionally, the Title IX and Student Affairs areas need to work with Housing and Residence Life to work through any student issues. It is also important that all areas understand the legislative information currently in place.

“We look at legislation and case logs and so forth that come out and may affect student conduct practice. One of the things we also have is a Sexual Misconduct and Title IX [Community of Practice], which is what I chair, so my responsibility in that chair role is to provide information to my colleagues throughout the nation in regard to how sexual misconduct and Title IX are associated with student conduct. Recent legislation in 2020 has sort of bridged those two offices back together. Where at one point it was – if it was a Title IX issue, it would stay Title IX, but the regulations were narrowed some; so now, if it is not a Title IX issue, the University still has the option of addressing inappropriate behavior in the student conduct process [and] making sure that we are in line with how that is supposed to be taking place in our university with both of our offices. That’s one of the things I will be responsible for sharing with my colleagues.”

Clanton takes his responsibilities with ASCA very seriously. He is given leeway to make the position how he sees it to be and is also given historical information regarding how others have managed this role. One of Clanton’s responsibilities is to reach out to individual members who have an interest in Title IX sexual misconduct as part of their work. He then provides programming to give them the opportunity to learn more, have discussions about their experiences and ask questions of each other for feedback. He also shares legislative updates with them and discusses best practices. As the Chairman, he is the person that represents ASCA members to the rest of the organization. Clanton is also responsible for giving presentations at the ASCA national meeting.

Clanton has been a member of this national association since 2008 and has held other leadership roles within this organization. At Life U, Clanton also had the opportunity to work with the Life U Title IX Office over the past couple of years, working with former Title IX coordinator Leigh Parker to do presentations during orientations. He also served as interim Title IX coordinator for just under a year when Parker left for a new opportunity. Because Life U did not have a lot of Title IX cases, he was able to focus on programming and outreach through Title IX while simultaneously working in his present position. During this time, Clanton approached several other departments, and together, they created the Title IX Programming Committee, offering several Lunch and Learn programs. He is currently working closely with the Life U Title IX Coordinator Feaunte Preyear, who began at Life U earlier this year.

“I really have an interest in Title IX, and I enjoy working in that field,” Clanton said.

Clanton’s interim work as the Title IX Coordinator and the passion he found from helping others by doing this work is why he applied for the ASCA Chair position.

“I really want our students to feel safe; that’s the biggest part for me. I want you to feel safe here. As a parent, a parent with a child who attended Life U, a parent who knows what it’s like to have a child in college, a daughter in college, it’s really important for me that students who are attending Life U feel safe on our campus and that if something bad were to happen that they have the support they need to remain successful. That’s what drives me. When I hear of situations, my first instinct is to make sure that all the parties involved feel safe and supported.”

A typical day for Clanton depends on where we are in the quarter and the time of year. Academic violations happen more often during midterms and final exams, and housing violations tend to happen more in the Winter Quarter because it is cold outside and more students are inside. Most days, Clanton’s morning begins with checking emails and reviewing incident reports that came in over the previous evening.

Throughout the day Clanton deals with incident reports as they come in and sending letters to students, inviting them to talk with him about the specific conflict. During his meetings with students, he shares with them the process and their rights, and he also gives them the opportunity to accept responsibility for the charges. Some will say yes, they did in fact do what they are charged with, while others will say that they would like the opportunity to plead their case because that is not exactly how it happened.

If the student wants to plead their case, they go before the Conduct Review Board which listens to and adjudicates for students who want to have a formal hearing. The Conduct Review Board consists of faculty, staff and students. He trains approximately 25 people to serve on this board throughout the year, generally in the Fall Quarter.

Clanton starts each day coming from an attitude of care and support for all Life U students. He works to achieve this especially as a student goes through the disciplinary process because, according to Clanton, the student will remember and have feelings based on how the process was handled long after it is over. He wants students to feel trust and know that they are not in this alone.

Possible Career Paths for Science Programs at Life U

Your Ally for Accessible Learning Content- Blackboard Ally for Life U