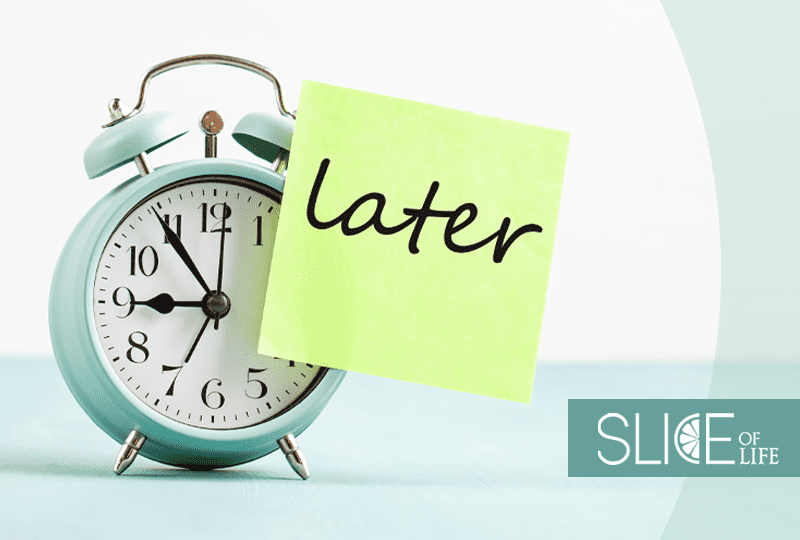 “This will be easier later.”

“This is a problem for ‘future-me’ to think about.”

An all too common problem for college students as well as professionals is the temptation to leave a task or problem for later. Surely later we will be more energetic; we will have had a flash of inspiration; tomorrow the problem will seem more manageable. While it is possible that in that moment you are tired and uninspired, it is far more likely that you are giving yourself an easy pass on a task you know you could get to, or far more seriously, you might be ignoring a problem that will only develop and get worse over time. Could it be that some forms of procrastination are enabled by the way that we think about our future?

Viewing the present and the future as disconnected entities can be dangerous‒sure, being optimistic is great, but the future is not an infinitely long and straight road down which we can perpetually kick the can of our troubles. Similarly, if someone of any experience were to be honest with themselves, they would acknowledge that the second, third and fourth time they return to a problem they are still extremely likely to find themselves searching for the familiar excuses of being tired or unmotivated. If we, however, think of the future and the present as more tightly linked, and if we recognize that there are far fewer degrees of separation between our present selves and our mythic idea of “future-me” who will handle the problem as if it were nothing, then that might go a long way to making ourselves fully realize and commit to many of the problems that we are aware of in our personal lives as well as on larger social scales.

One group that is working to provide people with a different perspective on time itself is a group called The Long Now Foundation, which aims to break up what they view as a short-sighted human limitation to always prioritize the present at the expense of the future (or our future selves). As they state for themselves, “The Long Now Foundation hopes to provide a counterpoint to today’s accelerating culture and help make long-term thinking more common. We hope to foster responsibility in the framework of the next 10,000 years.” In fact, Life University graduate Eric Plasker works to share a similar goal with people by challenging them to consider how they would change their lifestyle and health habits if they knew they were going to live for 100 years (but that’s a topic for another blog post).

One of the most striking ways the Long Now Foundation is trying to get people to reconsider and reimagine the future is by being able to visualize it. On a day-to-day basis, most of us encounter clocks and calendars that show us the future sliced up into days, months and years, and as a result, these increments come to represent “short” and “far” into the future. For a child, Christmas being a week away feels like forever, whereas to their parents that same time period hardly feels like enough to even finish wrapping gifts and hanging stockings. With this in mind, take a look at the 10,000 Year Clock, a project developed by the Long Now Foundation and actually currently funded by Amazon’s Jeff Bezos. The clock itself is enormous and is actually housed within a mountain of the Sierra Diablo Mountain Range‒watching a video of its construction can help you get some idea of how vast a piece of machinery we are talking about.

As the name suggests, the clock is designed to run on both natural and hand-supplied power for a minimum of 10,000 years; a particularly touching component is that the chimes built into the clock are so complicated that they can mathematically produce a different sequence of tones each time they ring over the next hundred centuries. This project demonstrates not just long-term thinking at a material level (as in the machine is supposed to function on its own without the need of maintenance or repair unless an accident occurs), but the way these chimes are designed also looks at the future as a series of unique moments that will each need to be treasured in their own way. As they describe, “Why would anyone build a Clock inside a mountain with the hope that it will ring for 10,000 years? Part of the answer: just so people will ask this question, and having asked it, prompt themselves to conjure with notions of generations and millennia. If you have a Clock ticking for 10,000 years, what kinds of generational-scale questions and projects will it suggest? If a Clock can keep going for ten millennia, shouldn’t we make sure our civilization does as well? If the Clock keeps going after we are personally long dead, why not attempt other projects that require future generations to finish? The larger question is, as virologist Jonas Salk once asked, “Are we being good ancestors?” These questions have long-reaching answers both in how we design the world around us as well as how we live our lives.

Thinking about the future in new ways, being able to actually see the gears set in motion that will be there and spinning centuries and centuries later, can be inspiring and motivating. On large scales, we need to be good ancestors to later generations who will inherit our planet, and on much smaller scales, we need to set ourselves up for success by taking on what we realistically can now and not believing that procrastination will make the process easier somehow this time. We take this commitment to the future seriously at Life University and hope that we can share these long-term sustainable values with you as well.

Desk Yoga to Stretch Your Day into Perfect Harmony