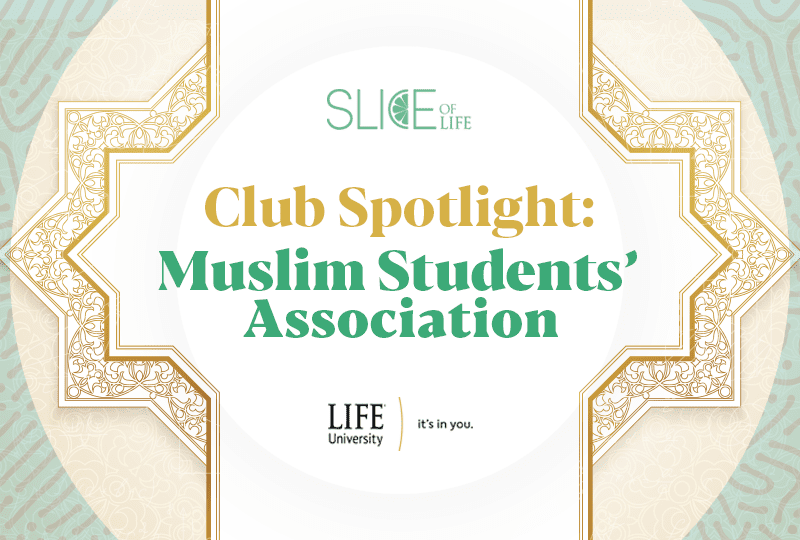 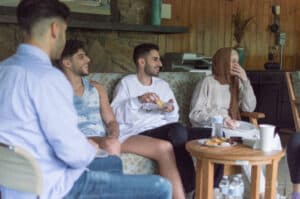 At Life University (Life U), we place a high value on Integrity, which at Life U “is defined as a state of completeness or wholeness; adherence to a set of values, implying wholeness of body, mind and spirit; and in our relationships with people and the planet.” Supporting the whole person and community at Life U is paramount to our continued success.

With that in mind, the creation of student organizations on campus such as the recently established Muslim Students Association (MSA) are a welcome addition, offering cultural and religious identity to students. According to the MSA National site, “MSA National has been a uniting forum for Muslim students from diverse backgrounds for over 50 years. It continues its mission of meeting the needs of Muslim youth on campus with the zeal and energy of the Muslim students but requires the support of the larger community. “

Ishma-eel Safodien, a B.B.A Business Administration student and Life U Men’s Rugby player, founded the Life U Chapter of the MSA and serves as the club’s president. This is the first student organization of its kind at Life U, and Safodien hopes for it to serve “as a representative body for all Muslim students on campus that gives Muslim students an opportunity to find their identity on campus.” Safodien at first didn’t know any other Muslims on campus, so now this group serves as a natural gathering place.

Aizya Ali, an M.S in Clinical Nutrition student, is an MSA member at Life U who expresses profound gratitude for the group’s existence.

“When Ishma-eel (Safodien) approached me about establishing an MSA for Life U, I felt overwhelming excitement and pride. I’ve recently moved to Georgia and the university I previously attended in Florida had a very strong MSA. MSA is important not only for Muslim students, but the entire Life U community as well,” said Ali. “It breeds visibility for those who may feel othered and fosters connection between all through cultural, competent education. In order for Life U to authentically represent diversity, every student must feel accepted, not just tolerated.”

Another MSA member, D.C. student Ayman Mahmoud, reflected that the importance of an on-campus group such as this one points to a simple need for which any successful campus should strive.

“Diversity is the first thing that comes to mind. But more importantly, it’s a platform where Muslims get to represent themselves, which isn’t always the case in some media sources. Also, inclusivity across cultures/beliefs is huge, I think. In the end, we’re all one kind – humankind,’ said Mahmoud.

The MSA serves as a valuable resource of information for Muslims on campus as well, letting students know, for example, where the nearest mosques are or where they can purchase halal foods (foods permitted to be eaten by observant Muslims).

The group has enjoyed being able to recently have its first in-person meetings, which were put on hold due to COVID-19. Muslim students at Life U along with the larger Muslim community in the U.S. observed Ramadan this year from the evening of April 1 to the evening of May 1. Traditionally, observers of Ramadan fast during this time, so the group came together on Eid to break their fast together at the end of Ramadan, as well as to begin to settle on a charity initiative they would like to get involved in as a community.

“Those are all massive and important aspects of being a Muslim. It’s about giving, it’s about spreading love and sharing the knowledge of Islam. I think the MSA has brought a lot of meaning to my life and my experience here at the University. It’s given me an identity, and hopefully, that’s the same for any and every Muslim that comes onto the campus,” Safodien said.

At first, Safodien admitted nervousness over how he might be perceived on campus and if his faith in Islam might make him stick out. But he needn’t have worried. Safodien was welcomed as another diverse individual that makes Life U such an invigorating place to be.

“I thought that people weren’t going to accept me because I live a slightly unique lifestyle, but I think my teammates on the Men’s Rugby team and the friends that I have created, the faculty and staff were just amazing. They were open to what my beliefs were and wanted to learn,” said Safodien.

The MSA is open to any student who wishes to learn more about this rich culture.

Slice of LIFE is an invitation to and extension of everything happening at LIFE University. Whether you are a current student, a potential freshmen, or a proud alum, Slice of Life can help keep you connected to your academic community. Know of a compelling Life U story to be shared, such as a riveting project, innovative group, or something similar? Let us know by emailing Marketing@life.edu.

Why Technology Makes it Easier for Us to Lie: A Psychological Perspective