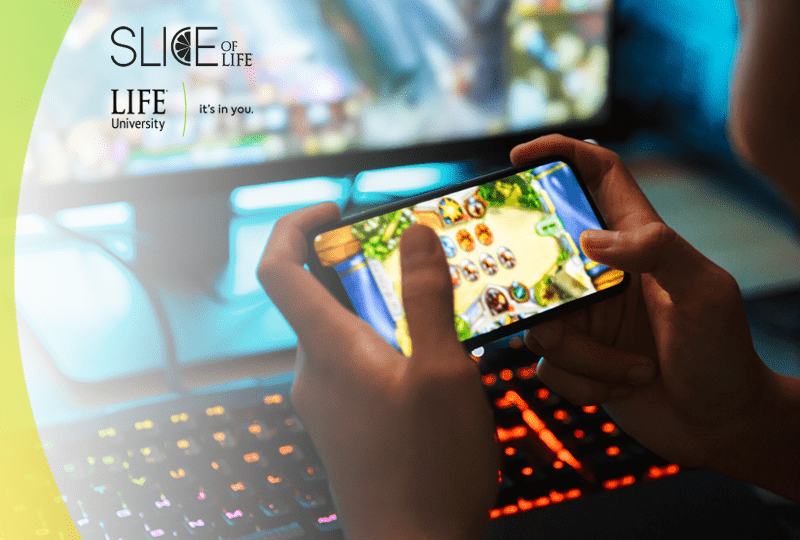 A day-to-day problem that we all face in the 21st century that earlier generations didn’t encounter (at least not in nearly the same way) is how we all have to monitor our “screen time” or how much time we spend at the computer or on our phone. Sometimes this means monitoring our work-life balance and making sure that we aren’t sagging under the feeling of always being on the clock; sometimes this means trimming the buds of envy or narcissism as we scroll around on social media; and, in a stark alternative to option one, sometimes it means watching out to make sure we aren’t having a bit too much fun. Today’s topic is for all of the quest completers, the PVP’ers and the 360 no-scope’ers. How do you know if you are spending too much time playing games?

First off, this isn’t just a “touch grass” message in disguise. Nor is this about video games being bad or a waste of time‒they are as valid a form of entertainment as anything else, whether you use them to relax by yourself or link up with friends. Third, this isn’t a checklist to see if you have a “gaming addiction,” because such a thing isn’t even recognized by the DSM-5. All we recommend you do is, every now and then, ask yourself if you would be happier if you played games less than you do. I have only a handful of times in my life realized I’ve watched too many movies a day and feel a little visually overloaded, and I don’t think I have ever regretted taking time to explore a new city. I have, even as a lover of games, looked up from my computer to realize the sun has set without me knowing or stood up after too many games of FIFA and felt a dull pain around my spine. I would realize that I was going through the motions of habit rather than really doing anything that I would remember in a day or two’s time. If that sounds like a familiar feeling, then now is a fantastic time to try to think about putting some limits on your gaming time to hit the point of moderation that feels best for you.

So what leads us to spend too much time playing a game? During my college days, you would hear about people playing too much World of Warcraft or Call of Duty, missing classes or tests, and ultimately dropping out of school. Sure, there were probably other factors to those stories than video games being simply “too good,” but I have never heard of someone dropping out of school because they spend too much time looking at Renaissance paintings. There are a couple things to keep in mind here, and they will have different levels of importance for different readers. One simple reason that people’s behavior playing games has changed dramatically since the early 90s is that games have become more and more massive. Obviously, this makes sense in a bang-for-your-buck sense, but I know people who want the reassurance that a game might take them more than a hundred hours to complete before they buy them. Second, the interconnectedness of consoles and PCs via the internet means that competitive play exists, and it “never sleeps.” There is always someone out there to challenge; there are always other people increasing their rank or making their team/character/deck better; and there are always tips to be read online about how you might tweak your strategy for more wins. Finally, ever since video games no longer became a static entity (that is to say, once upon a time you bought Super Metroid for SNES and that was that; you had the whole game and it wouldn’t change), developers work to constantly shift and update games to bring players back. This might come in the form of holiday events or costumes to unlock, or designers might send out regular emails to their fans advertising new upcoming content. At the farthest extent, we also live in a world where it is actually possible to make money by being a competitive gamer or streamer. All of these forces combine to mean that not only have games become shinier, more accessible and more diverse than ever, but they also are designed to give players a continuous, steady drip of new content or challenges. In the best case, this means you have new ways to kick back after work and have fun; in the worst cases, this means compulsive playing behavior and an intense fear of missing out.

So again, if you ask yourself “Would I be happier if I played video games less,” and you answer “Yes,” what should you do? Well, first of all, just as if we are setting up a weight-loss program, think about what your target goal is. If you are that person who has forgotten to study for a test because of Elden Ring, then maybe scale down quite a bit, whereas if you just feel you still have a lot of quarantine habits that encourage you to sit around the house, then maybe just try to trim out little bits here and there. Again, gaming itself is just fine, so it’s really not a great idea to go “cold turkey” and just try to quit because this often will just leave you frustrated and cut off from something that should be a healthy source of fun. Here are five tips for curbing those urges:

All of these are things you might consider if you are looking to cut down on your time with a controller in your hand. With a little luck, they won’t just help you spend less time sitting motionless in a chair or less time feeling anxious that other people are out there grinding while you aren’t. On the contrary, hopefully it will help you have more fun with games because they feel like an escape from the world again. From there, you are free to try to stick to the “healthy gamer” classics like only playing while standing up or some variant of the “Ten pushups each time I lose” method. Happy gaming!

Slice of LIFE is an invitation to and extension of everything happening at Life U. Whether you are a current student, a potential freshman or a proud alumni, Slice of LIFE can help keep you connected to your academic community. Know of a compelling Life U story to be shared, such as a riveting project, innovative group or something similar? Let us know by emailing Marketing@life.edu.

Interested in computers as a career? Learn more about Life University’s Bachelor of Science in Computer Information Management.