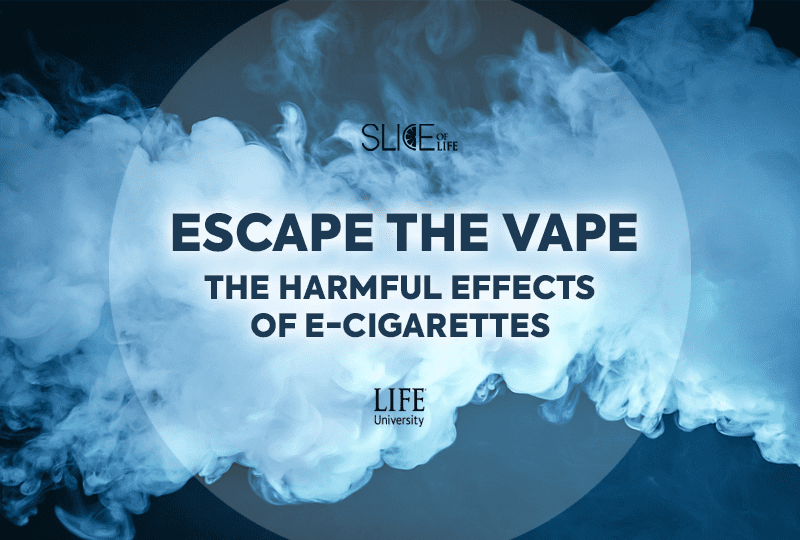 Escape the Vape- The Harmful Effects of E-Cigarettes

Vaping is a pervasive culture phenomenon, a harmful habit shrouding users in white vapor that may lull them into a sense of security. Manipulative advertising and trendy flavors have especially made vaping popular among teens and young adults, but the health risks cannot be ignored. Ironically, E-cigarettes are often marketed as a way to ease off tobacco use, but for many people, it has either replaced one bad habit with another or lured non-smokers into what first appeared to be a safer tobacco consumption method.

As detailed by the Center for Disease Control (CDC) in their Smoking & Tobacco Use webpages, Vaping is the slang term used to describe consuming tobacco and/or other harmful substances, such as marijuana, using an E-cigarette. An e-cigarette works by heating a liquid version of the tobacco/etc. to produce aerosol, a mix of small air particles that the consumer breathes in. They come in many shapes, sizes and formats, from a disposable e-cigarette that resembles a standard cigarette, to a rechargeable USB Flash Drive shape, vape pens, tanks and mods.

Because vaping eliminates the need for traditional fire smoke in the lungs, sometimes people can make the mistaken assumption that it is safe. According to an article in John Hopkins Medicine titled “5 Vaping Facts You Need to Know,” while it is true that vaping is considered to be less harmful than smoking, it is by no means safe.

The Dangers of Nicotine and Vaping

It may seem like a rather obvious point to remind people of, but it is one that bears repeating. Almost all e-cigarettes, roughly 99 percent in the U.S. according to the CDC, still contain nicotine. Deceptive labeling is an issue too, as some vape product labels do not disclose that they contain nicotine, and even some vape liquids marketed as containing 0% nicotine have been found to contain nicotine. According to John Hopkins Medicine, nicotine is a highly addictive chemical, with research suggesting that it may be as addictive as heroin and cocaine.

The American Heart Association further illustrates nicotine’s dangers in an article titled “How Smoking and Nicotine Damage Your Body.” When nicotine is consumed, it can cause an increase in blood pressure, heart rate, blood flow to the heart and narrowed arteries. It can also contribute to the hardening of the artery walls, which increases heart attack risk. Nicotine lingers in the body for six to eight hours.

Then you must deal with numerous typical nicotine withdrawal symptoms, which will become most acute if you try to quit smoking or vaping. These potential symptoms include cravings to smoke or vape, irritation or grouchiness, trouble sleeping, jumpiness, restlessness, increased hunger or weight gain, anxiety, depression or more general sadness.

And nicotine is just the first major concern in this certifiable Molotov cocktail. In October 2021, research from Johns Hopkins University on vape ingredients revealed thousands of chemical ingredients in vape products, most of which are unidentified. Among those the team could identify were several potentially harmful substances, including caffeine, three new chemicals not previously found in e-cigarettes, a pesticide and two flavorings linked with possible toxic effects and respiratory problems. The CDC also noted other causes of concern in e-cigarette aerosol, including heavy metals such as nickel, tin and lead, as well as volatile organic compounds and ultrafine particles that can be deeply inhaled in the lungs.

A reported outbreak of lung injuries and deaths associated with vaping has put the CDC on alert. In February 2020, the CDC confirmed 2,807 cases of e-cigarette or vaping use-associated lung injury (EVALI) and 68 deaths attributed to that condition. The lung injuries are most commonly attributed to modified vaping devices, black market vaping devices or black-market modified e-liquids, especially vaping products containing THC. Vitamin E acetate, a common thickening agent in e-cigarettes, was also identified as a chemical of concern, as it was found in all lung fluid samples of EVALI patients.

Trying to quit smoking? Turn to approved options, not vaping.

Vaping has been touted by some as a way to ease off smoking, but the jury is definitely still out on that score. For now, e-cigarettes have not been approved by the Food and Drug Administration (FDA) as a smoking cessation device. Recent studies have found that more likely than not, people that intend to use e-cigarettes to stop traditional smoking usually end up continuing to use traditional and e-cigarettes. Vaping also attracts new and younger tobacco users who often have never even tried traditional cigarettes.

If you or a friend are trying to quit and want aid to ease off nicotine, consider an FDA- approved nicotine replacement therapy, such as patches, gum, lozenges, inhalers or nasal sprays. Explore effective quit methods with Smokefree.gov.

Stay safe out there and breathe well!

Life University (Life U) is a tobacco-free campus. All students, staff, faculty and visitors are prohibited from smoking, using, selling, free distributing and advertising tobacco products and electronic smoking devices (e-cigarettes) in all facilities and on all University property. Read more about our policy here.

A Discussion with Bill Watson, Life University’s Director of the Center for Excellence in Teaching and Learning (CETL)