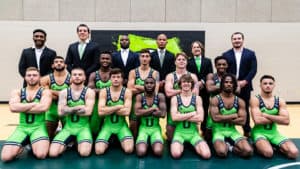 Tyree Johnson (141 lbs.), Denver Stonecheck (149 lbs.), Jack Bass (157 lbs.), Sid Ohl (165 lbs.), Asher Eichert (174 lbs.), Myles Starke (184 lbs.) and Zane Lanham (197 lbs.) each stood atop the podium in their weight class for the tournament. In the South Division postseason awards, Stonecheck was named the Most Outstanding Wrestler of the Tournament, Brandon Orum (125 lbs.) was named the Freshman of the Year, Ohl earned Wrestler of the Year honors and head coach Omi Acosta received Coach of the Year accolades.

The Running Eagles finished the tournament with a total of 198 team points to claim the team title. The team finished with 18 bonus point matches that included 12 pins, four major decisions and a pair of technical falls.

“First, I want to thank God for the opportunity to compete and the safety of all our guys,” Acosta stated. “I feel blessed that we were able to get this far in the season, and I am eager to see our guys compete on the national stage. Early in the year, we set a goal to qualify all 12 guys for the NAIA Championships, and we did. The entire team stepped up when we found out we were headed to Southeastern for the tournament, and I am proud of the fight and domination they displayed. Now, we turn our focus to the national tournament in two weeks.”

The men’s wrestling team will now turn its attention to the NAIA National Tournament, which will take place on March 5 and 6 in Park City, Kansas.

Founded in 1974, Life University is a health sciences institution most known for its Doctor of Chiropractic (D.C.) program, the largest single-campus chiropractic program in the world. Undergraduates can pursue 14 undergraduate degrees as well as a pre-chiropractic, degree-seeking pathway. Three graduate degrees are available, encompassing areas of sport health science, clinical nutrition and positive psychology. Some degree programs are offered to distance learners through the College of Online Education.

LIFE’s 110-acre campus in Marietta, Georgia, just northwest of Atlanta, is home to more than 2,700 undergraduate, graduate and professional students who come from all 50 United States and more than 45 countries.

LIFE UNIVERSITY OFFICE OF DIVERSITY, EQUITY AND INCLUSION EXPANDS “WITH LIBERTY AND JUSTICE FOR ALL” SYMPOSIUM SERIES