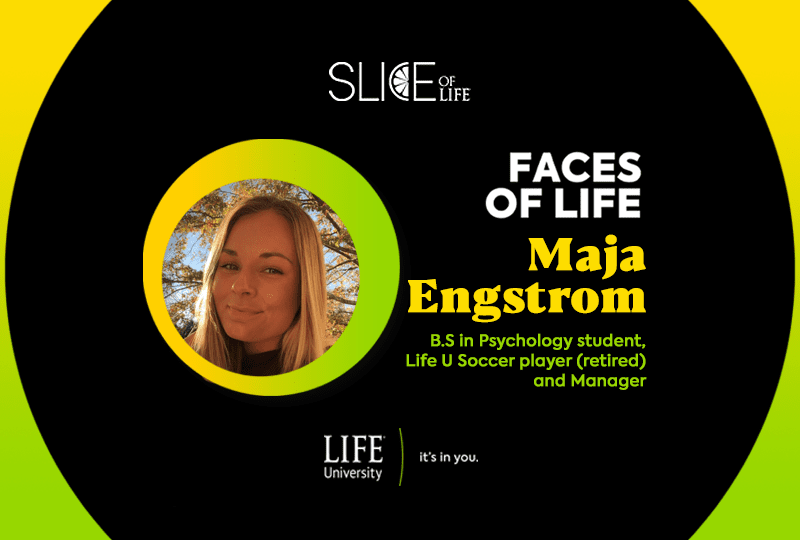 “The Psychology of an Athlete”

Norrköping, Sweden is Maja Engstrom’s hometown, where adolescent Engstrom could usually be found kicking around a fotboll, or soccer ball as it is called in the U.S. Her desire to continue to compete in soccer served as a major factor that originally led her to Life University (Life U).

The Psychology program at Life U also proved to be a draw, because she studied psychology in Sweden’s educational equivalent to high school. Sweden’s educational models are optional. Upper secondary schools offer either vocational or higher educational preparatory styles. Students like Engstrom test into their desired programs and study more specialized material. In Engstrom’s case, she had an equivalent of a major in Economics and a minor in Psychology.

Engstrom first thought that Economics was a good fit for her because her parents had both studied economics. She believed that taking a practical path could open many doors, but through the recruitment process and finding the best collegiate fit overall, Life U’s Psychology course catalog stuck out.

“I was just looking through the programs and saw Psychology, and I thought ‘Well, that’s interesting.’ Because I have always been the type to want to help people, to do what I can to help others and be a support. I’ve always been through a lot myself, mentally,” said Engstrom. “So, I felt like going into a profession that I can help people that struggle with similar things that I have been through, especially as an athlete.”

Engstrom specifically has grown interested in sports psychology after taking a course on the topic, which had her “blown away.” Her goal after graduation is to return to Sweden to get her master’s in Sports Psychology.

For now, Engstrom is making the most of her time at Life U, working as a Fitness Center Attendant in the Life University Fitness Center. She is also a manager for the Life U Women’s Soccer team. Unfortunately, between delays due to COVID-19 and personal injuries, Engstrom’s official playing time with the University was limited, but she is still part of the team in her manager role. She misses her family, her parents and her two younger siblings, but she “is super glad to have the team and all the friends there.”