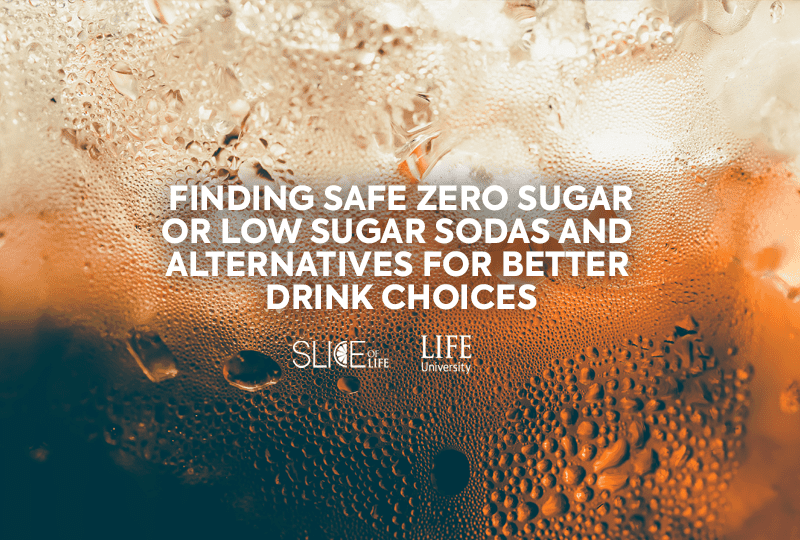 Hello, Life University (Life U) community. My name is Kelsey Asher, and I am an Integrated Content Creator here at Life U that loves to share with our community about Life U news, programs and relevant general health topics. In a recent meeting with my team, the topic of coffee and soda drinking as our necessary boosters came up off-handedly, and I joked about how I tend to be a pretty healthy person but soda has been that one vice that I can’t quite kick. I barely drink, I have a sweet tooth but it’s under control, I limit my carbs but soda? That’s a tough one for me. Our blog recently explored this topic in a general sense in a past piece, “Fizzy Drinks and Empty Calories”.

Partially inspired by that piece, I am now on a journey to find what I dub my “Holy Grail Beverage”, a caffeinated soda or similar alternative that is made mostly with natural ingredients, containing little to no sugar and that doesn’t take up a quarter of my grocery bill. Oh, and that doesn’t taste like a sock. No big deal, right? My co-workers found my Quest for the Holy Grail Beverage to be an interesting personal story that I should share and explore, so here goes nothing.

Before I get into some interesting products that are worth trying out, I want to go into a bit of the pitfalls I have faced in my personal journey. I have grown up in Georgia my whole life under the Big Red Giant that is Coca-Cola, and I’m a big Coke Classic fan who later turned to Diet Coke and Coke Zero when I became more weight conscious. I love Coca-Cola and personally, it’s fine in moderation. But soda can be pretty addictive also, so finding other options that at least minimize the potential health concerns seems like a good idea in my book.

The Trouble With Aspartame

Aspartame is kind of a grey area for me in terms of soda. It is a sugar substitute common in diet sodas that has had some concerns in terms of potential cancer risks, though admittedly those concerns have not been substantiated by the Food and Drug Administration (FDA). I have a family history of some cancers, so I personally choose to try to avoid it. It is a personal choice. As it stands, the FDA states that the maximum amount a person should consume of Aspartame in a day would be 50 grams, which would equal typically an insane amount of consumption at about 19 cans a day.

However, Aspartame still gives me pause due to the simple fact that its effects on the body over time do not appear to be thoroughly explored. In September 2017, a review in ​Nutrition Journal​ titled “Health outcomes of non-nutritive sweeteners: analysis of the research landscape” noted that there are numerous evidence gaps related to the health effects of nonnutritive sweeteners, including aspartame, so more research is necessary to affirm their safety.

Similarly, a June 2018 paper in Nutritional Neuroscience titled “Neurophysiological symptoms and aspartame: What is the connection?”, the research suggested a potential link between aspartame and behavioral and/or cognitive problems. These potential issues include headaches, irritable mood, depression and insomnia. Aspartame acts as a chemical stressor, which can have adverse effects on brain health. The researchers advise that aspartame be approached cautiously and that more research about the effects of aspartame regarding brain health is needed.

All this is to say, I am focusing on options without Aspartame in this list but it is a personal choice whether or not aspartame is something you wish to avoid.

Note: Before I start my list, I should mention that these are merely my own choices that seem interesting and worth trying for yourself if they seem appetizing to you. We are not selling anything and it’s not an advertisement. It’s just information to think on.

These drinks in particular are of special interest to me personally as Ale 8 One Bottling Company is a small beverage company located in my dad’s small town of Winchester. Kentucky. Ale 8 One (usually just called Ale 8) is locally famous across the state of Kentucky and relatively well-known throughout the Southeast. Their products are usually found on Kentucky store shelves, specialty beverage sections and of course online.

The classic Ale 8 and Ale 8 Zero Sugar are essentially ginger ales, but they are truly beyond description in terms of their refreshing taste and iconic citrusy undertones. The drinks are at their best cold and straight from their recognizable green Longneck bottles, but they also come in cans.

I wouldn’t called Ale 8 Zero Sugar an all-natural alternative as they do use some artificial ingredients, but it is a relatively short ingredients list which I always take to be a good sign and it is the only caffeinated ginger ale I have found that does not contain aspartame. It also has no calories in addition to no sugar. There is also a Caffeine-Free version and a Cherry Ale 8 Zero Sugar.

From A to Zevia

Zevia is a California-based beverage company that offers a broad range of zero sugar, zero calorie, naturally sweetened beverages typically utilizing Stevia, plant derived leaf extract. They offer 15 different soda flavors including Creamy Root Beer, Cherry Cola, Orange Cream and many more exciting options. Some contain caffeine and some do not. They offer a fun Rainbow Soda Variety Pack with 12 of their flavors and 2 cans of each flavor, which allows you to try most of the options.

Reviews of taste say that in general it is comparable to standard colas or drink flavors, but a lighter taste. I tried the Cream Soda, Ginger Root Beer and Cola flavors and it’s indeed a thinner flavor, but still very good considering it is stevia based. I imagine that these kinds of drinks grow on you over time. One more feature to note is that since they don’t use artificial dyes, the drinks are all clear so that is kind of fascinating especially when drinking a cola flavor.

Unexpectedly, the packs are a little bit more expensive, with the cheapest I found being $15 for the Rainbow 24 pack on Amazon. Zevia does have a store locator at the bottom of their site to find brick-and-mortars sellers near you, available in many Target, Kroger and other similar locations.

Similar to Zevia, Green Cola is naturally sweetened with stevia leaf extract and natural flavorings, It utilizes natural caffeine sourced from green coffee beans. It is also sugar free, with no calories or aspartame. The cans seem to be a little smaller at 12 oz, and it is also a bit pricey for roughly $10 for an eight pack on Amazon. It’s not easily found in stores. Some reviews say it is a closer taste to standard cola then they find with Zevia.

I have tried Virgil’s in the past and it tastes great, very much like old fashioned sugar cane sodas though it is actually an all-natural sweetener blend of erythritol, stevia and monk fruit. They have a long line of Zero Sugar options, but they are most known for their Root Beer and Orange Cream Flavors. Those two flavors are the easiest to find in stores, and in truth you would want to stick to in store purchase for this. A four pack is usually about $5.50 in store which is pretty reasonable but online it goes up to typically $30 or more for a 12 pack. Use the store locator to find Virgil’s near you.

Sparkling Water and Other Alternatives

I have found sparkling water to be an acquired taste that I have personally not learned to acquire. However, it is a healthy alternative that many have turned to for their bubbly fix. Popular brands to try are Bubly, La Croix, Topo Chico and more.

Lastly, there are other drinks that you can incorporate in your diet instead of soda that are generally a little healthier such as tea, lemonade, or juice. Just be sure to look at nutrition labels and look for options that are as natural as possible, without a lot of additives or sugar. Have fun exploring and finding healthier beverages that work for you!