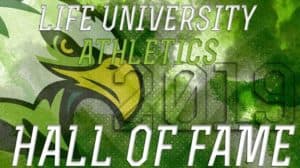 “Kaiser was the men’s basketball coach at Life U from 1991-2000. During his tenure, he developed the basketball program into a household name within the NAIA. He claimed three national championships in 1997, 1999 and 2000, as well as runner ups in 1994. Kaiser led the Running Eagles to the NAIA National Tournament for eight consecutive years from 1993-2000. He was named the NAIA Men’s Basketball Coach of the Year in 1999 and 2000 and was inducted into the NAIA Men’s Basketball Hall of Fame in 1999.

Spino was the men’s cross country and track & field coach from 1991 to the early 2000s. At the helm of program, he captured four cross country titles in 1998, 1999, 2000 and 2001, two indoor track and field titles in 1997 and 2000 and won four consecutive outdoor track and field titles from 1997-2000. He was named the NAIA Men’s Cross Country Coach of the Year in 1995, as well as the Indoor Track and Field Coach of the Year in 1997 and 2000. Spino also was named the Outdoor Track and Field Coach of the Year in 2000. During his tenure, he coached 39 individual NAIA National Champions and currently sits second all-time in individual titles at one event with five in 2000.

Lambert was involved with the Life U rugby program from 1983-1988. In his time as a Running Eagle, he was named as the captain of the team. After graduation, Lambert became a household name with USA Rugby as he earned 18 caps with the U.S. Men’s National Team and made appearances on the sevens squad. He represented his country in the 1987 Rugby World Cup and was named to the All-World Team in 1998. USA Rugby inducted him into the Hall of Fame in 2018 for his contributions to the rugby community globally.

Life University Director of Athletics Jayme Pendergast had this to say about the inaugural class, “Life University has a rich athletic history, and it was critical to start honoring the best of the best. This first class of inductees will always be special, and I hope the celebration will be special for them and their families. Roger, Mike, Silah, Zoila and Gary all have an amazing résumé, and we are proud to honor the significant way in which they impacted Life University. My hope is that our current student-athletes see the accomplishments of those who have come before them and strive to be part of a future Hall of Fame class. I look forward to having each of them back on campus to share this special accomplishment.”