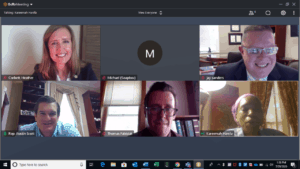 In the meetings, Ms. Hanifa and Dr. Fabisiak shared firsthand experiences of the impact of Life University’s initiative to provide higher education in prison. Ms. Hanifa described how the Introduction to Positive Business course that she took with Professor Marie Powell while she was incarcerated prepared her to start her own business, and how she developed a social and emotional learning curriculum that she has taught to students at Carver High School since her release. She and Dr. Fabisiak also spoke about the ripple effect of higher education in prison: how it empowers students to be mentors, teachers and role models to other people in prison, as well as to their children and other family members on the outside.

The Georgia DOC and Life University representatives encouraged the legislators to support the REAL Act, a bill that would reinstate eligibility for Pell Grants for people in prison. Since 1994, incarcerated people have not been allowed to apply for Pell Grants to fund their education. When the ban went into effect, it had a devastating impact on higher education in prison programs in Georgia and around the country. In 2016, Life University became the first college or university based in the state of Georgia to provide an accredited college degree program to people in prison in more than 20 years.

This year, Life University was one of 67 sites selected to participate in an experimental initiative of the Department of Education that enables schools to temporarily waive the Pell ban. This initiative and the bill to reintroduce Pell eligibility reflect a wide consensus among representatives from both political parties that providing access to higher education in prison provides a common-sense way to reduce prison populations, promote the wellness of people and communities impacted by mass incarceration, and advance racial justice.