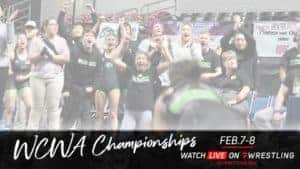 The WCWA individual champions will automatically be qualified for the 2020 United States Olympic Team trials to be held at Penn State University in the beginning of April. Alongside the WCWA Championships, the Pan American wrestle-offs will take place on Saturday, February 8. Six of the eight athletes competing at the event are former WCWA participants. All coverage will be provided by FloWrestling and can be viewed here: 2020 WCWA/Pan Am FloWrestling Video Coverage.

At 53 kg, there will be a three-woman wrestle-off for the spot. Because Hildebrandt vacated her spot at 53 kg, Winchester, who is moving down from 55 kg, will advanced to the finals of the bracket as a returning World champ. Winchester will face the winner of a prelim bout between 2019 National Team members No. 2 Katherine Shai and No. 3 Haley Augello.

Another three-woman wrestle off will play out at 57 kg. As the 2019 World Team member, Jenna Burkert will sit in the finals. Burkert will face the winner of a prelim match between 2016 Olympic champion and 2017 World champion Helen Maroulis and two-time World silver medalist Alli Ragan.

The preliminary rounds will feature one match at the respective weights, and all finals will be a best-of-three series. Read the full story from Team USA here: Special Wrestle-Offs set for women’s freestyle Pan Am Olympic Qualifier spots on Feb. 8.

Below is the schedule for the Pan Am wrestle-offs:

The full event schedule can be found below:
Thursday, February 6

Tickets for the event will be sold at the door. The prices are as follows:

$20 – Weekend Pass
$20 – Individual Day Pass
Group rates for six or more will be available at the door.

Wyndham Garden Marietta Atlanta North and the Hampton Inn and Suites Atlanta/Marietta are the official hotel sponsors of the event. Mention Life University for the discounted rate, or follow the links provided. Following the link will automatically input the discounted rate.

2019 LIGHTS OF LIFE TO BEGIN THANKSGIVING EVENING, NOVEMBER 28, ON THE CAMPUS OF LIFE UNIVERSITY