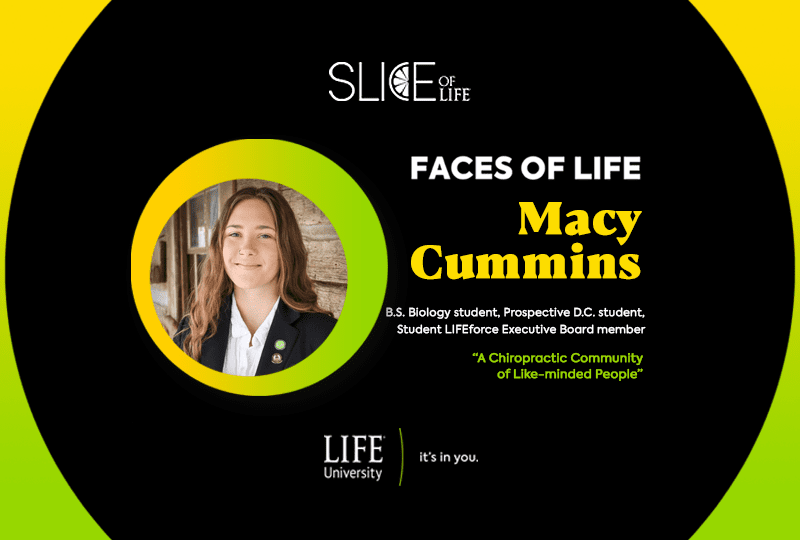 “A Chiropractic Community of Like-minded People”

Native to Aurora, Colorado, Macy Cummins is no stranger to chiropractic care as her dad is a chiropractor and alumnus of Life Chiropractic College West (Life West)*. Cummins’ conviction to pursue a career in Chiropractic solidified in eighth grade after attending her cousin’s graduation from the D.C. program at Life West.

During spring break of her sophomore year of high school, Cummins began her collegiate tour to find the right college and chiropractic environment for her future career. First stop: Life U. Despite the cold and rainy weather that her family experienced at that time, Cummins immediately recognized a “hominess.”

“I just knew that this community and the philosophy of Chiropractic that comes out of the school is where I needed to be,” said Cummins.

Currently, Cummins is completing her B.S in Biology in preparation for her D.C. major. She really enjoys engaging with clubs on campus, in particular Student LIFEforce (SLF), the Pediatric Experience Student Club (Club PX) and MaxLiving (MaxU). As an Executive Board member for SLF, Cummins manages the social media and virtual outreach needs for the organization.

Cummins originally became involved with SLF at the insistence of her friend Jordy Carle, a fellow SLF member whom she met at a seminar. Carle’s passion for SLF was immediately apparent to Cummins, so she had to check it out.

“He said, ‘You should join Student LIFEforce! It’s so fun; there’s networking and connections.’ That quarter was an SLF recruitment quarter, and I just loved everyone that came up and talked to me […]. Just the friends in the community I have made is just unreal; they are such great people,” noted Cummins.

Cummins mentioned how she wished she had joined SLF sooner because “not only do you have awesome opportunities to network with other doctors every quarter, and they often reach out to you to come shadow, but then you also build such a strong community of like-minded people that you can go to with just about anything but also have fun working on Chiropractic and on your career path while in school.”

In keeping with her desire to learn and grow as a future chiropractor, Cummins also regularly attends events for Club PX, a pediatric chiropractic club created by Dr. Tony Ebel that meets on Wednesday nights at Life U. She also is involved with MaxU, which focuses on the business and promotional side of running a chiropractic practice. Cummins is making the most of her time at the University, absorbing all the interesting information she can so she can be empowered to succeed.

*Despite the similar name, Life University (Life U) and Life West have no direct affiliation with one other.

Trivia – What is an Anatomage Table?